close
Ellen Page and a short running time save Fragments 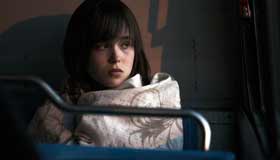 Shot in the spring of 2006, The Tracey Fragments stars Ellen Page as a 15-year-old Cannuck who loses her mind, her little brother and possibly her virginity. In what order isn’t made clear. Director Bruce McDonald presents Maureen Medved’s adaptation of her own novel, based on a series of monologues, using an array of split-screen devices. The technique can’t be dismissed as experimental or gimmicky; rather, it’s the logical way to tell this bleak story. Nevertheless, the movie desperately needs its two saving graces, Page and a sub-80-minute running time. If it lasted much longer or featured a lesser actress, The Tracey Fragments would be unbearable. As the picture stands, it’s a must for members of Ms. Page’s fan club, a solid tutorial on the pros and cons of incessantly chopping up the screen, but of little interest to the majority of moviegoers.

Tracey Berkowitz is met riding around an unnamed city in the back of a municipal bus wrapped in what we later discover is a shower curtain. Talking directly into the camera and in voiceover, she reveals bits of her story, which are dramatized out of sequence and using black-bordered squares and rectangles, plus other cut-and-paste effects. The multi-frame technique lines up flush to mental disintegration and, as we learn, Tracey is becoming unhinged for good, though not for earth-shatteringly original reasons. Her parents are models of dysfunction, she’s harassed by schoolmates and her younger brother Sonny—evidently autistic and encouraged to bark like a dog (by Tracey)—is missing. Her parents send her to a female shrink played by an actor in drag; and her crush on the Bob Dylan-esque new boy at school goes unrequited. At some point, Tracey runs away from home and meets “Lance from Toronto” on the streets. He takes her to a bar and then back to his apartment, the scene of further trauma.

In case these events weren’t troubling enough, a blizzard is on the way and recurring images of black crows and a white horse are thrown into the nightmarish mix. Tracey’s multi-pronged predicament and its strobe-like presentation wear you down, but even that requires solid execution. McDonald, a veteran with lots of TV and indie filmmaking experience, can’t be accused of adopting an avant-garde pose. A mock title sequence at the 25-minute mark is one of his better touches. The Tracey Fragments will be remembered as a shard in Page’s filmography. After tackling Hard Candy and this dark, depressing material, no wonder she and audiences found the comedy in Juno so liberating, and that she agreed to repeat herself by combining paler aspects of both in the dramedy Smart People.