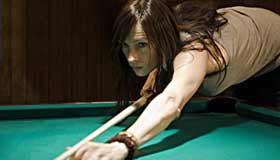 That a character study of a woman who is primarily a pool hustler has a poker reference for a title is only the first indication that Turn the River may be better described by another term from the vocabulary of Texas Hold ’Em: “flop.” Although star Famke Janssen turns in an at-times gripping performance as a single mother desperately to rescue her son from her abusive ex, actor Chris Eigeman’s first shot at writing and directing amounts to a scratch.

Eigeman seems to have mistaken giving his principal players odd—or at least improbably pronounced—names for character development. Case in point, our ex-con antiheroine Kailey (with the i, not the a being the long vowel) is determined to hustle up $50,000 to pay for forged passports so she can smuggle the son she never had custody of, Gulley (Jaymie Dornan), across the Canadian border. The intent is to get Gulley out of the clutches of the frustrated former seminary student (Matt Ross) she seduced—thus earning eternal damnation from the latter’s obsessively observant Catholic mother (Lois Smith). Instead of rooting for Kailey, however, audiences will likely wind up mostly feeling sorry for her kid—not only because he’s been slapped with a clunker of a name like “Gulley,” but also because he has not one, but two, profoundly unfit parents. Dad David (apparently lousy names run on the other side of the family tree) is a smoldering rage-aholic who hates his job and lives in constant fear of his mother Abby. Oh, and he recently broke his son’s arm—an entirely obvious crime that he only admits to when Kailey holds him at gunpoint late in the movie.

Kailey is aided—although not entirely abetted—in her “rescue” mission by a grizzled old pool-hall proprietor nicknamed Quinn (Rip Torn), who starts out innocently enough by passing letters from “Kai” to “Gulls” but soon enough is talked into helping the bleary-eyed hustler set up a big-money match against one of his regulars. The game is “one pocket,” a particularly poor choice on the part of Eigeman seeing as casual cinemagoers are likely to be entirely ignorant of the subtleties of this subset of pool—thus making the showdown more puzzling than exciting.

The veteran Torn struts his standard gruff stuff as Quinn, but the best performance in Turn the River is by Janssen—who won a best-actress award at the Hamptons International Film Festival for her portrayal of Kailey. The former model pulls a full-on Charlize Theron here, de-glamming herself to play a woman whose obvious beauty has been worn away by a bunch of bad breaks. Hopefully, more moviegoers will catch a performance as promising as this Turn in another rack.