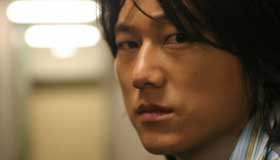 Korean-American revenge drama is jam-packed with juvenile attempts at experiment and flat, trite dialogue. While Sung Kang plays lead character Samuel with a fair share of charisma, his character lacks depth. Other actors are even flatter, but then we can’t expect them to weave magic with lines like “People like us gotta be true,” and “I don’t wanna die.” While the film features a Korean-American cast that could entice a market seeking representation, Undoing stretches into a faux-arty direction that can’t but alienate the niche it might otherwise attract. It’s hard to identify for whom the film is made, making it hard to identify box office prospects.

This is the macho, cinematic equivalent of girls taking pictures of their feet. Flights of cinematic fancy abound. Undoing is inundated with split screens, low camera angles, slo-mo and the occasional sojourn into what looks like bleach bypass. The use of these stylistic devices is detrimental. At times the oversaturated colors and high-contrast lighting render the actors unidentifiable. Fortunately, the plot is pretty plain-Jane, so the only confusion we struggle with is “What were they thinking?”

With the questionably assistance of a corrupt cop, naïve but ambitious Joon (Leonard Nam) gets a bag full of narcotics to sell. A good son at heart, Joon’s goal is to put the proceeds of this drug sale (Screw those kids he’ll hook on pills!) towards his family’s debts. His best friend Sam is present when Joon is shot and his drugs stolen. Joon (who doesn’t “wanna die”) is scared to go to the hospital for care, but after the fear of death hits him, he begs his friend to take him to the ER. By that point, Sam can’t past the fear over his friend’s wrongdoing and puts him in a car, and puts that car in a swamp. Sam leaves LA, but later returns to “undo” what he’d done. This undoing involves a reburial, and if I learned anything from Goodfellas, it’s that reburials make even hard-nosed gangsters puke themselves. Sam didn’t seem to have any issues with it, and this corpse was his best friend. Go figure.

Sam reunites with his girl, sets up a semi-elaborate money-laundering scheme involving stolen credit cards, and circumvents the “stealth” of what has to be the single daftest assassin ever.

Ultimately, the film’s aesthetics are in strident conflict with its narrative. While the film struggles under the strikingly thin net of its own plot, Chan Lee’s direction borders on magazine-style beauty. Glossy moments with excellently chosen limited focus lead to saturated segments with orange hills and grain fields. The film contains a good deal of beauty and the occasional moment of poignancy, but those are wholly submerged by contrivances that are ultimately hard to overcome.