close
In War, the Cusacks are winning 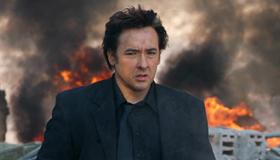 Piercingly funny political satire with terrific cast is on view in this future-set story. A Middle Eastern-type country is thrown into chaos when the former U.S. Vice President’s new company occupies it and takes over. Recalling movies like Dr. Strangelove and Wag the Dog, War, Inc. demonstrates how invading foreign territory is good for the economy, and in so doing is very reminiscent of the smart and daring kind of filmmaking Billy Wilder and Stanley Kubrick have done in the past. Although not for every taste, with its name cast topped by John Cusack (who also co-wrote and produced) and its election-year release, War, Inc. ought to be able to carve out a box office niche with sophisticated specialty crowds looking for a challenging and stinging view of a world that has spun out of control.

This type of satirical picture is by far the hardest thing to pull off. If it doesn’t connect all the dots just right, it falls flat, but this one works with great dialogue and actors who make it sing. The time is the near future, and the desert country of Turaquistan has been recently “acquired” by the American corporation now run by a former U.S. Vice President (perfectly played by Dan Aykroyd with a tip of the hat to Dick Cheney). In order to monopolize the country’s assets, a hitman named Hauser (Cusack) who enjoys drinking straight shots of hot sauce is hired to derail a Middle Eastern oil minister named Omar Sharif who has plans to run a pipeline through the country, which would create huge problems for the “new owners.” In order to pull this off, Hauser poses as a PR man involved in setting up a U.S. brand show and arranges the high profile wedding of Central Asian pop star Yonica Babyyeah (an almost unrecognizable Hilary Duff).

The plot thickens when Hauser is given an assistant (Joan Cusack) who knows where all the bodies are buried and with the arrival of a hot, liberal-leaning investigative reporter named Natalie Hegalhuzen (Marisa Tomei) who is sniffing out all the turmoil. In addition to the complications caused by all these new relationships, his CIA past starts haunting him—making his attempts to assassinate the oil magnate all that more daunting.

Yes, Cusack has been down this hitman road before in Grosse Point Blank (one of his better films), but clearly seems to relish the opportunity here to make fun of the corporate greed he believes has overtaken the government. Seeing this kind of cynical, acerbic filmmaking surface again reminds us just how much this type of thing is missing in today’s movie scene. All performances are perfectly pitched, including that of Ben Kingsley, who turns up as Hauser’s former CIA boss. And it’s particularly nice to see brother and sister John and Joan Cusack working so effortlessly together on screen.

Given a smartly timed summer limited release and hopefully good critical response, War, Inc. should not only turn into perfect adult counter programming, but a movie like no other around. Those who get it will surely spread the word.