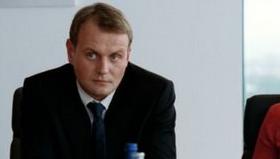 A German accountant named Yella answers the siren call of capitalism in this award-winning psychological drama. Filmmaker Christian Petzold meets his goal of providing an alienating portrait of the business world. His pitch entails roaming the antiseptic corridors and byways of modern commerce in a disembodied, dreamlike state, and he’s not out to “sell” viewers or profit from their sympathy. Yella ’s prospects for cashing in at American theatres are undercut by its very success in making business seem soulless and cold—an alluring abstraction that can have dire consequences.

In effect, Yella (Nina Hoss) is shadowboxing with her expectations about the global economy after having jilted her husband Ben (Hinnerk Schonemann) when his small business went bankrupt. She feels guilty about dumping him, and Ben’s not taking it well. But his stalking only increases her determination to start over and grab her share of the Euro pie. She has a sixth sense for figures and knows her way around a ledger, qualities which have helped her land a job at a Hanover firm that makes wing components for Airbus planes. She says goodbye to her father and reluctantly accepts a lift to the train station from Ben. The short ride is not without incident. The position in Hanover doesn’t pan out, but she meets a financier (David Striesow) who asks her to work alongside him negotiating debt packages with struggling industrial companies. Her intentions of mining money and finding a new romance appear to have dovetailed nicely.

Petzold gets high marks for the atmosphere he evokes with his spare production. The environment is clean, desolate and under-populated. Yella’s journey takes place on trains and in cars, hotel rooms and sleek, steel-and-glass conference rooms. The lack of clutter tips you off to what’s really going on, though there are other hints that all is not what it seems. Lush piano music signals both the specter of past, failed romance and the promise of a lucrative, emotionally fulfilling future. Yella’s yearning to become a productive capitalist has made her the aggressor vis-à-vis Ben, but she’s also a victim of sexism in the workplace and of domestic violence. More to Petzold’s point, she falls prey to the illusion that one can have at all. Men are predatory and possessive, quick to lust and anger. Her response is to try to beat them at their own game, yet the payoff proves illusory.

Inspired by the 1962 film Carnival of Souls, which was released in the U.S. under the equally apt title Corridors of Evil, Yella won the German Film Critics’ Best Film award (Petzold’s third) plus four major Lolas, and Hoss won the acting prize at Berlin in 2007. Petzold’s work has a special resonance in Germany, but non-Europeans may not relate to the specific sociological points he’s making here about the integration of eastern Europeans into the free-market economy. Most everyone will recognize that Yella is trading on the stereotype of Germans who are better at business than romance. By putting Yella and the audience in a suspended state, the transaction explores a generalized anxiety about the values of the capitalist system and its toll on individuals, especially women. Business and high finance aren’t as sexy as they’re cracked up to be. Making money is a bitch.