close
Tea doc makes comment on the price of civilization

All in This Tea 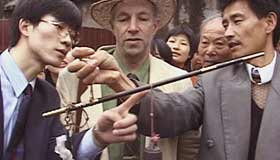 China’s tea trade was undermined by an often-overlooked theft by Englishman and entrepreneur Robert Fortune back in 1843. On a journey through China’s tea country, Fortune clandestinely took plant samples and seeds for replanting in the English colony of India. This act transformed tea exporting and growing into an “English” business. With the history of tea so beset by stories of colonial piracy, it’s a funny thing that All in this Tea ’s gentle, tea exporting, protagonist, David Lee Hoffman could be compared to the likes of Englishman Fortune.

Hoffman travels the distant countryside of China in search of high quality tea. As the economic borders of China expand, the exporting limitations narrow, and Hoffman’s practices of buying teas straight from the farmers (a practice that benefits everyone but the major exporting bodies) poses its own challenges. Hoffman is sweet. He does his own organic farming and knows loads about worms. It’s clear his intentions are good, if not downright charitable, but his path is straight uphill. Perhaps this is why his story seems so engaging. He doesn’t speak a word of Chinese, but he sits with monks and drinks tea from precious, tiny cups, and in that moment everyone seems united and everything seems whole.

Moving between the showy tea competitions in China and the messy work of seeking out farmers, Les Blank and Gina Leibrecht’s film highlights the divide between the culture of tea and the commerce of it. Hoffman’s connection to the tea is more than social; he’s connected to the earth that bore the plant that sustains him - physically, emotionally, economically and spiritually. Ultimately, Hoffman becomes a kind of fallen St. George, who tried to sleigh the dragon of commerce but had to sacrifice his passions to survive: it’s a beautiful metaphor for filmmaking and a painful comment on the price of civilization.