close
Amanda is worth the search 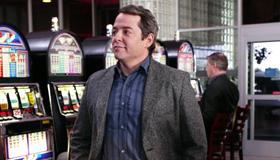 Comedy writer Peter Tolan makes a strong directorial debut in this film about a Hollywood hack who tries to rescue his niece from hooking. The familiar premise here has sharp fangs, unsparing wit and a knockout performance by Brittany Snow as the round-heeled 20-year-old. Auds might not expect much, but those who venture in will spread good word of mouth that may boost DVD rentals.

Playing Taylor, a floundering, filthy rich sitcom scribe, an awkward Matthew Broderick is Ferris Bueller mildewed by booze. A gambler—horse races, mostly—he squanders mad amounts of cash with the faux-naive recklessness of a boy who still thinks he can get away with anything. He’s the kid who knew it all and the adult who’s lost, and as a neat visual trick, he seems to broaden (and shorten) with age while his wrinkles smooth out like an inflated balloon. Taylor’s a big tipper and big talker, but now no one’s buying it. Wife Lorraine (Maura Tierney) is done with his screw-ups and lies, so to save their marriage, he pilgrimages from Pasadena to Las Vegas to find their niece Amanda (Snow) and drag her from the pole to a posh rehab.

The set up is labored and trite but zings to life once Snow pops into the picture. We’re expecting a hardened tramp or a broken doll; Tolan right-hooks us by presenting the prostitute as cheerleader who’d smile through anything to survive. Amanda treats her job like a goofy hobby that affords her two cars, a perfect condo and a kept man (a petulant Peter Facinelli). She and a friend got into it after taking a pole-dancing class at the community college and consider it easier than waitressing. Even if we don’t agree with her, we eventually believe she’s telling the truth. Snow’s performance is a revelation. She describes months of rape by another uncle as offhandedly as what she had for lunch and squeals at the thought of inviting Taylor over to a real adult dinner where she’ll serve courses and wear a cute apron. Her sweet grin rarely cracks, but when it does we see how important it is for her that it stay in place; her happiness is forced, but its roots run deep. As her best friend Whisper, Jennifer Rau has a brief, but riotous scene. Boyfriend Facinelli is a manipulative goon who twists Amanda’s need for a perfect life starring him for his own needs. On her refusal to let him screw other women in their home, he whines that it’s emasculating.

What Tolan does right is to take a rote premise and refuse to let it feel false or preachy. There are no hugs or gooey meltdowns, nor is there a cliché definition of vice. When Amanda and Taylor visit her drug dealer, he’s not a player in a sharkskin suit petting pit bulls, but a slob in a bland apartment watching infomercials while an addict bobs her head in his lap. A running joke is that no one in Sin City believes that the pair are actually related. Offers one casino boss (Patrick Fischler), “I can get you a better niece—how about a black niece?” Their shared relief at finding a permissive family member is like a ray of light. But when they compete over who’s worse—the better to excuse their own failings—things get dark.