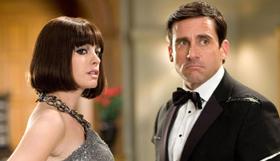 Inspired by, but not shackled to, the memory of the hit 1960s TV series spy spoof, Get Smart has been turned into smart summer entertainment that retains the likeability and wit of its source material but brings it into the 21st century with a perfectly cast Steve Carell stepping in for Don Adams and a slew of expertly choreographed action sequences to complement the laughs. Expect strong opening box office numbers followed by good word of mouth.

Created by Mel Brooks and Buck Henry (who are credited as consultants here), Get Smart ran for five seasons through the latter half of the ’60s, winning several Emmys and spawning spin-off movies and another short-lived series in 1995. Now, however, it has been given a full-blown major studio update, the latest in a long line of TV adaptations for the big screen—and one of the most entertaining thanks to a blueprint that honors what made the show work but makes sense for savvy 2008 filmgoers who may not have even heard of the sitcom.

Since the original series was basically a takeoff on Cold War spy antics, director Peter Segal and screenwriters Tom J. Astle and Matt Ember had to bring the whole concept into a post 9/11 mindset, so even though CONTROL is still fighting KAOS, the word “terrorist” is heard much more often than “Russian.”

Carell, choosing to play Max more subtly and nebbishly than Adams, is now an analyst for the agency who dutifully pushes paper but dreams of being a field spy. Unfortunately, he lives in the shadow of superstar Agent 23 (Dwayne Johnson) until headquarters is attacked and most of the agents’ identities are suddenly compromised. The Chief (drolly played by Alan Arkin) has no choice but to promote Max to Agent 86 and team him with the much more competent and experienced Agent 99 (Anne Hathaway), who initially resents the pairing. Together, they forge a union to do battle with KAOS operatives Siegfried (Terence Stamp) and Shtarker ( Borat ’s Ken Davitian) who are out to create a network of terror.

Although the familiar bottomless phone booth is on display along with all of Smart’s
famous catchphrases (“Would you believe?”; “Missed it by that much”; “Are you thinking what I’m thinking?”), the tone and feel of this version is very much its own. In fact, the best stuff are the set pieces created just for this film, including the dart-launching Swiss army knife Max has so much trouble with and all the various over-the-top chase sequences a TV series could never pull off, budget-wise.

In addition to the shrewd casting of Carell, Hathaway is the ideal 99 and Johnson, continuing his flight from “The Rock,” proves again he’s got great comic instincts. Stamp and Davitian are fine as the heavies, but the parts are one-dimensional at best. A Bill Murray cameo is wasted.

In an innovative move designed to cash in on all the marketing and drive Warners’ new march into what they call “parallel content,” a feature length direct-to-DVD companion piece will be released on July 1 (just 11 days after Smart ’s theatrical debut) called GS: Get Bruce and Lloyd focusing on the related misadventures of a couple of the lesser supporting characters played in the film by Masi Oka ( Heroes ) and Nate Torrence.

Either this is the quickest sequel in movie history or a smart Smart tie-in that could also have the added benefit of further driving the film’s box office receipts.

Clearly Warners’ is expecting a hit in Get Smart, and they probably have one.