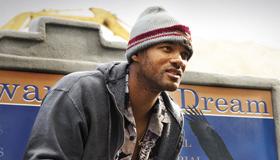 Brash, excessive and supremely inelegant, Hancock can be fun  if you like that sort of thing. The over-the-top action sequences easily rival the film’s most immediate competition ( Wanted ), but add a surprising edge—finally we have a black, cinematic superhero and he’s operating in a universe that’s very modern. Though thinly realized, the title character is given some minor emotional development through the use of music, but even played by the reliably good Will Smith, Hancock is not worthy of the heft of its title. Still, box office promises to be huge as the action genre is finally making a stride in directions that could sway more towards niche without losing its wide appeal.

Outside of X-Men 's Storm and the ever-broadening cast of TV’s Heroes, minority superheroes haven’t enjoyed tons of discovery. Modern comics are riddled with series that explore the plight of “real world” characters afflicted with superpowers and their attendant consequences (the Hulk can’t socialize or experience intimacy, Daredevil pops pills to subdue the pain of battle wounds), but those real-world characters are frequently cultural majorities, emotionally struggling under soul-sucking bourgeois malaise or numbing mediocrity (see Spider-Man, Wanted ). In a unique but soap-opera-inspired turn, what sets Hancock apart from his contemporaries is his amnesia. As a result of his memory loss, he carries himself with a recklessness commonplace among bullies. A good portion of the first act is dedicated to Hancock’s dereliction of duty, his absolute irresponsibility with his powers, which, while it helps out the police, incurs millions of dollars in damages. Still, he’s effective. A comic foil in this period of wanton destruction is found in an 8-year-old bully Michel, who’s French, blonde, a touch portly and picking on the son of Hancock’s PR man Ray (beautifully played by Jason Bateman). Michel’s reckless behavior is easily subdued by Hancock, and then promptly explained by Mary (Charlize Theron): He’s acting out because his parents are divorcing. There’s a similar emotional displacement at hand with Hancock’s recklessness, but in this case, we’ve no one to offer up any trite psychology.

The film’s biggest drawbacks are visual. The premise is pretty high concept and the effects are largely impressive, but the manner in which director Peter Berg invokes energy and tension are all easy and speak to the “klass” of low end TV drama. Jittering handheld camerawork is not only misplaced, it’s overused in places where it’s hardly required at all. On a more foundational note, the script by Vincent Ngo and Vince Gilligan deliberately leaves certain major developments needlessly untended. The identity or origin of Hancock the “man” is a constantly repeated mystery, and instead of using the mystery for cliffhanger-style suspense, it’s bandied about, and once we’re done not caring about it for 90 minutes, the matter’s left unresolved. I’m sure such a mistake could be salvaged or exploited in the service of franchising down the road, but in the face of this and so many other missed opportunities, it’s simply hard to care.

The audience’s lethargy is matched by the film’s laziness. Intensity and purpose are communicated in the film via completely indolent means. When Hancock goes to jail, we’re exposed to the threat of his neighboring convicts with the throwback rap “Colors,” thus eschewing any dramatic onus on the prisoners and tastelessly cashing in on the minority angle. When Mary (Charlize Theron) comes to see Hancock for “business,” she’s changed from her regular uniform of gauzy nudes to black. Berg didn’t think it overt enough to let the actress’ posture connote import, no; he had the makeup artist spackle her with black eyeliner. Don’t get me wrong; the makeup looks great, but how absurd! For the first two acts, she’s miss granola LA, but when she takes on important tasks she goes dark?

I’m not so sure Berg is losing faith that his audience can follow along—the film is intended for a broad base and did get a surprising PG-13—but in the face of so many comic book films entering theatres, it seems a poor choice to differentiate yours by way of tacky TV-level antics.