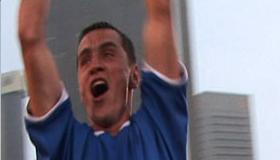 Colin Farrell executives produces and narrates this very particular documentary about the very universal sport known in the United States of America as soccer, but known to much of the rest of the world as football. For the sake of international peace and reconciliation, we shall use both terms here. The “particular” juxtaposition is football to homelessness. There is, much to this reviewer's surprise, an international league of homeless soccer players. Yep. There is, in fact, an event known as The Homeless World Cup. Yep. And, it has been challenged since the founding of the league in 2001. Also yep. Frankly, all of this strikes one as funny, if not actually silly, but, as presented in this thoughtful and poignant documentary, it is neither. It is, in fact, wonderfully lucid and occasionally transcendent. Neither of which are concepts that often translate into box office revenues, even when the subject is the world’s most popular sport, as narrated by Colin Farrell.

There are numerous details and statistics provided in Kicking It regarding the conception and creation of the league beyond the information provided above, and on endemic homeless around the world. For instance, there are an estimated one billion homeless people in the world. A seventh of the population is homeless. This is astounding. One billion people are also, apparently, about the number of fans who watch the World Cup each year. This is less astounding. All of that, and a good deal of similar information notwithstanding (as is the case with most captivating documentaries) are what makes Kicking It a film that indeed transcends the narrow confines of its “particular” subject, which really isn’t football but its human stories.

What we actually have here are a host of human stories about the homeless, put through the prism of soccer, as a path for the expression of one’s humanity—one’s worth.

It doesn’t matter who wins, but the film provides us a number of triumphs, anyway, both on and off the field. And a few failures, as well.

And Collin Farrell isn’t even irritating. Which is notable, because he usually is.