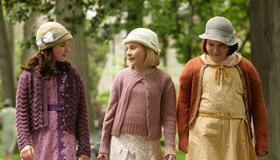 See the movie. Buy the dolls. Simple as that. The first in a planned line of movies based on the popular American Girl book and toy series is opening June 20 in limited runs with tie-ins to the American Girl retail stores, followed by a wide break on July 2. In this edition, Abigail Breslin stars as a Depression-era cub reporter who must solve a mystery in order to save her family’s home. The G (for Girls only)—rated movie is so tame it makes Nancy Drew look like Eyes Wide Shut, but if every 8 year old with one of those dolls shows up, box office returns—particularly at matinees—could be nifty.

After smash results from Sex and the City comes a younger femme-centric project from HBO Films, New Line (and its soon-to-be-defunct specialty division, Picturehouse) that promises to combine the movie/shopping experience for packs of little girls everywhere, guaranteeing future generations addicted to clever studio merchandising tie-ins.

Set in Cincinnati in the Great Depression of the ’30s, Breslin plays Kit Kittredge, an aspiring reporter whose heart is open to bringing home stray basset hounds and young hobos (Max Thieriot and Willow Smith) willing to work for meals. Her happy life is thrown for a loop when down-on-his-luck dad (Chris O’Donnell) loses his car dealership and must leave town to find work. The family, now temporarily led by mom (Julia Ormond), tries to make ends meet by selling eggs and veggies and taking in zany tenants including a magician (Stanley Tucci), librarian (Joan Cusack) and man-hungry dancer (Jane Krakowski). She also tries to foster her budding journalistic career by attempting to convince a craggy newspaper editor (Wallace Shawn) to publish her glowing article on the hobo community. But complications arise when a crime spree points toward the nearby hobo camp where Kit’s friends live. When her own family becomes the latest victim, she must get to the bottom of things—with the help of best buddies Ruthie (Madison Davenport) and Stirling (Zach Mills)—by solving the mystery.

Unapologetically old fashioned, this live-action strictly-for-kids pic (competently directed by Mansfield Park ’s Patricia Rozema) seems like a throwback to the kind of movie that Shirley Temple might actually have made in the era depicted in the film. Perhaps that’s the point, but at any rate it proves to be a feel-good look at a feel-bad time with a candy-coated, well-scrubbed cast of characters that don’t exactly look like they are singing those deep Depression blues. Breslin is her usual sunny self and carries the film effortlessly with good support from young co-stars Davenport, Mills and Thierot. Will Smith’s daughter Willow also has a couple of nice moments. The adults are secondary, but Cusack and Tucci make the most of their over-the-top roles. Grace, the basset hound, gets a lot of close-ups too.

No great shakes, but if it brings a few smiles to the younger audience members and some instant additions to their dollhouses, it will have achieved everything it set out to do.