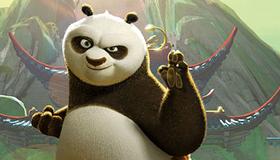 Jack Black provides the voice for Po, a panda with a yearning to unleash some kung fu, in Dreamworks Animation’s Kung Fu Panda. Panda is pretty much a competently told “chase your dreams” tale that also offers some pretty exciting visuals and some standout voice work. Younger audiences are the bread and butter here, but their parents won’t be totally dozing off either.

Whatever may be irritating about Black’s often overly quirky big screen presence is less distracting when applied to an animated character. Black should really consider doing more voice work (take that however you want) because he injects Po with the right amount of humor and heart.

Yet it comes as no surprise that the comedy vet is totally upstaged by Dustin Hoffman, who provides a voice to Shifu, the pint-sized kung fu master who is forced to train Po so that he can stop the threat of Shifu’s former student, Tai Lung. Hoffman injects nuances and emotional notes that really add to his cynical, overly-serious character. Older audiences will be relieved by Hoffman’s grounded presence in between all the goofiness.

Ian McShane (of HBO’s Deadwood ) also adds some real menace to Tai Lung, whose fall-from-grace backstory is presented in a surprisingly compelling way. Tai Lung belongs in a category with Scar from The Lion King. He’s a truly scary animated villain.

Even though Panda is one of the last animated flicks that Dreamworks won’t be making in 3D it’s still very easy on the eyes and it should help to keep the studio in competition this summer with the juggernaut that is Pixar.