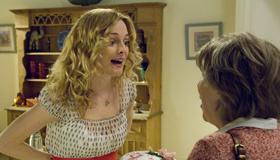 Heather Graham’s latest comedy was stillborn before filming began. Miscasting her as a Brit with a deafening biological clock, director Eric Styles and writer Camilla Leslie have made a punishingly unfunny trifle about sex, love and maternity in which both women and men are flatter than magazines—walking, talking issues of Lady’s Home Journal and Maxim. Graham’s fan base skews more male than female, yet given a choice, even guys would rather cross the multiplex for Sex and the City.

Georgina (Graham) gets misty at the scent of baby powder; her filmmaker boyfriend Zak (Tom Ellis) seems physically repulsed by the smell. At his sister’s baby shower, he even blames the shattering of her plaster pregnancy mold on an innocent tot—an early foreshadowing of the script’s thudding obviousness. His one moment of empathy comes when, nodding along as pervy friend Brian (Will Mellor), who later asks a woman if he can watch her pee, schools him that when women “hit a certain age, they get funny about babies and shite.” In short order, Georgie dumps Zak, and he flees the country with his model-heiress assistant Alexandra (Ruta Gedmintas)—the only person with a personality more repulsive than his—where the two-person crew attempts to shoot a documentary on “Ireland.” (Sounds like a winner.) We’re immediately confronted with three more absurdities: one, that Georgina single-handedly runs a construction company despite needing Zak’s help to pick out a brick; two, that she has only one egg left and four days to fertilize it; and three, that in all of London, Roller Girl can’t get laid.

Best friends Clem (a reasonable Mia Kirschner) and Justin (Orlando Seale), the token queen, pitch in on her sperm hunt, the ladies wrestling with posh British accents that leave them sounding like they’re pinching their nose and eating marshmallows. “Humor” comes in moments like Justin ordering an hor d’oerves round of poached eggs (whaa?) so Graham can scrunch up her face and moan. Her other emotion is a big-eyed head tilt signifying everything from lust to desperation. Compounding the cluelessness of a script in which every one of Leslie’s character attributes feels like a drunken dare, Styles’ direction has the grayed-out pallor of a musty sitcom and every comic beat is obvious and stale.

To this point, Miss Conception has been foolish; once it about-faces and attempts to convince the audience to root for Georgina and Zak to reconcile, it plummets to a rare level of moronity best exemplified when Zak realizes he needs to talk to Georgie right now. Their cell-phone call dropped, he decides to take the next flight home. When that’s sold out, Zak sensibly hires a taxi and drives across Ireland, ferries across and rents another taxi to make the cross-country trip to London. Wouldn’t redial be easier? Such efforts to stretch out the drama would only make us root harder for their love if it would take these idiots out of the gene pool.