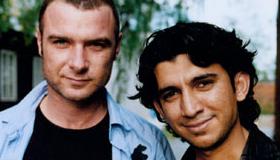 Nina Davenport’s Operation Filmmaker is like one of those expeditionary documentaries from the 1930s, or maybe King Kong, where a native is plucked from a dangerous land by Westerners with questionable motives, only to find their plans thwarted by the beast’s untamable nature. In Davenport’s film, the beast is Muthana Mohmed, an Iraqi twentysomething whose love of American film survives the bombed-out conditions caused by those very same Americans. Mohmed’s unique story was the subject of a segment on MTV seen by actor Liev Schreiber, who was preparing to direct an adaptation of the Jonathan Safran Foer novel Everything Is Illuminated. Moved by the plight of a young Iraqi whose dream seemed destined to go unfulfilled, Schreiber and his producer Peter Saraf arrange for Mohmed to travel to Prague to work on Everything Is Illuminated as an intern. The result is as problematic as the documentary chronicling his adventure. Although movies about Iraq are batting zero at the box office, the MTV and Hollywood sell points, along with careful handling, should allow Davenport’s film to eke out a few bucks.

As an expression of liberal white guilt (“Baghdad needs artists,” Schreiber declares), plucking a war-torn kid from possible death so he can toil in a field of craft service tables is better than most. Mohmed could turn out to be the Iraqi Spielberg, making films about the human condition and his Western saviors could bask in his reflected glory. Too bad, then, that Mohmed is a manipulative jerk. Granted being a manipulative jerk is usually an industry prerequisite, but his baffling attitude threatens to blow his chance to permanently escape a home-front situation that could literally kill him.

Upon arriving on-set, Mohmed is warmly greeted as the Iraqi kid who made it out thanks to Hollywood despite his admiration for President Bush (“I love George Bush because he changed my life.”). But as Everything is Illuminated star Elijah Wood correctly comments, once the reality of “‘Now you’re here to work’ set in, it confused him.” It also bruised his unjustifiably large ego. Much of his work is menial and revolves around copies and coffee. Mixing peanuts in a cup and learning about legal clearances was not what Mohmed had in mind. He’s also lazy. Given a golden opportunity to edit a gag reel for the wrap party, Mohmed goes clubbing instead, disappointing his bosses. But at every turn, he’s able to play the sympathy card. If he were to return to Iraq after working with a Jewish director on a film featuring Jews, he would surely be killed. So could you help him extend his visa? He’s good, this kid, but he’s also a little prick. Mohmed alone could be cited as another reason why America shouldn’t have invaded Iraq. It’s never entertaining spending time with someone so unappreciative, especially considering the alternative is returning home, where his friends videotape their sad lives and beg him to stay away (even if he has to “start from zero,” says Mohmed’s brother).

But there is something sociologically intriguing about a young opportunist who can so fully prove the adage that guilt is the gift that keeps on giving. With his visa about to expire as production wraps, Mohmed wrangles an extension by landing a PA gig on the Prague production of Doom, starring Dwayne Johnson. And Mohmed works his magic there, as well. Doom co-star Doug Jones sheds tears at the thought of Mohmed bringing life to a lonely on-location shoot. And The Rock himself throws in some money to keep Mohmed’s dream, whatever that is, alive. Even Davenport helps him out financially, although such a breach of documentary etiquette begs the question: Was she just trying to keep his story going for the cameras?

Indeed, as Mohmed later travels to London and New York in a seemingly constant battle to extend his visa, the movie feels as if it’s trying to figure out its larger point as it goes along. Davenport eventually settles on Iraq War allegory, but it seems forced, especially her claim that “I had wanted a happy ending  now I’m just looking for an exit strategy.” At least she didn’t bust out Colin Powell’s famous Pottery Barn analogy to explain why she stays with Mohmed for so long. Everyone carries their symbolic load, but it’s just too convenient to say that Mohmed represents lazy Iraqis who won’t stand up for themselves and that America is a land of sincere bumblers patting themselves on their broken backs for displaying such generosity. Not when this is really just the story of an indigent grifter, scamming his way from couch to couch.

In the micro-genre of documentaries that started as one thing and ended as another thing, Operation Filmmaker is not as focused as Keith Fulton and Louis Pepe’s Lost in La Mancha or Tony Montana and Mark Brian Smith’s Overnight. Unlike those films, Davenport is forcing her themes to emerge instead of letting them come. But as the story of an exasperating, manipulative, lazy and entitled young man, it’s one for the books.