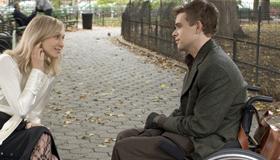 A confident middlebrow drama than mistakes itself for a Grand Guignol thriller about apotemnophiles—the walking wannabe disabled who want to cut off their limbs. Slow, somber and a little too straight faced, this intriguing little curio might lure indie cinephiles into the theatre before kicking around on Netflix.

At 8, Isaac (Nick Stahl) was in a car accident that took the lives of his parents and the use of his legs. Mind and face still intact, Isaac is now a late-20s public radio reporter who, just like everyone else, is trying to get over an ex (amputee model/athlete Aimee Mullins), find a new dame and get a leg up on his career (no pun intended). None of these things are easy; for Isaac, they’re just another wrench or two harder. The first stretch of writer/director Carlos Brooks’ deliberate dramatic thriller plays like a social-problem film with a touch of wit. His able-bodied, hard-bodied blind dates split when they grok his wheelchair and as for catching a cab in Manhattan, fuggetaboutit.

With a mysterious tip-off about a man who offered a surgeon $250,000 to amputate a healthy leg, Isaac learns about an underground society of paraplegic wannabes desperate to deserve their own chairs and crutches. Isaac’s guide introduces herself online as “Ancient Chinese Girl”—a red herring that’s half true as the Mandarin-speaking Fiona (Vera Farmiga) turns out to be a dead ringer for Heather Mills, a continually distracting irony. Fiona’s a knockout. She’s also one of the wannabes and pairs lingerie with leg braces with the sexy swagger of a courtesan wearing thigh highs. “I’m already paralyzed,” she insists. “I’m just trapped in a walking person’s body.” Fiona and Isaac fall in lust. Or maybe even more. But the crux of their connection is their need to understand how the other lives. Fiona wants a tutor—her first time taking her wheelchair out for a spin, she’s as clumsy as a drunk robot. And Isaac can’t understand why someone would saddle herself with the handicap he’d kill to overcome. At least, he thinks he would.

Brooks’ measured noir is slow and shocking, I suppose, if one hasn’t already heard of apotemnophiles. ABC’s already done a feature on a man who deliberately packed his legs in dry ice and was overjoyed when they turned black. What’s under the surface of those with this disorder is a swirl of envy and exculpation. What better way to avoid pursuing the American Dream then to frame your losses as immovable defects? (Even though many of the disabled spend their lives trying to prove otherwise.) Mainly, Fiona just wants to feel special and her glamorous apartment isn’t cutting it. When Isaac tells her his mind is on another woman—a paraplegic—Fiona reacts with the wounded fury of someone dumped for a rival who’s richer, hotter or smarter. Fiona’s push/pull seduction is geared to make Isaac recognize his own dark relief at his handicap, and these moody exchanges mixed with mystic surrealism have a lazy pull that keeps audiences stumbling along after the latest plot twist. But the film is lightest on its feet when it shakes off the Red Shoe Diaries foreboding for moments of sly irony, as when Isaac’s condition so unnerves a dank basement meeting of wannabes that they stand, pack up their chairs and literally run up the stairs.