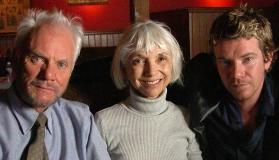 Middling at best, amateur at worst, Tamar Simon Hoff’s newest is a postmortem family dramedy set in modern Dublin but shot in California. Malcolm McDowell is awkwardly cast as Enda Doyle, the father whose death brings his semi-estranged children back under the same roof. Though the actors, save McDowell, mostly hail from Ireland, Red Roses and Petrol is mired by cliché and oddly beset by a sense of false Irishness. Though interest might be piqued for those compelled by Gaelic traditions, this one can’t hope for much attention and numbers can’t be grand.

After Enda Doyle, local librarian and/or poetry instructor (such a distinction is not made absolute) at the neighboring university, passes on his mourning wife (Olivia Tracey) receives consolation from her kids, who demonstrate varying degrees of commitment. Daughter Medbh (Heather Juergensen) lives with mom and witnesses all with the solemn but irritable dedication of the last child to leave. Daughter Catherine (Susan Lynch), now a New Yorker, comes home for the funeral with boyfriend in tow. She’s sort of the punching bag of the family. Finally, the unreliable, erratic and errant brother Johnny (Max Beesley) arrives just after the funeral and spends the entire film blaming the family for his generally disastrous mental health. I suppose it’s a sign of modernity that he repeatedly invokes the name of his therapist.

Yet, outside of the occasional cue towards the modern, the film feels stale and the settings predictable. Based on a play by Joseph O’Connor, the film relies extensively on overly worn ploys: The son is damaged and violent, the girls are all trying to get away, the father waxes poetic and morose in equal measure, the mother holds her head up and tries to keep things all together. Somewhere in there, they gripe about their past misgivings, do a jig, sing a folk song, lament their childhood and ferociously guard seemingly uncontroversial secrets. All, one can only assume, in the service of fulfilling some hackneyed genre checklist.

The character of Mr. Doyle, around which the family blithely rallies, is thinly realized and brashly played by McDowell, with an Irish accent that seems a touch more Bostonian than perhaps intended. But for all the downsides of this sidelined performance, the most lamentable aspect of the character is his incessant videotaped reveries, which he performed in his office, to a moderately personified camcorder. He drinks, dishes and kvetches in front of this camera, and now that he’s gone, the remaining tapes provide his family some matter of detached company. Beyond the banality of this convention, it’s worth noting how it sets up the father in a lonely space. His family, who mourns in their largely dysfunctional ways, was apparently not good enough sounding boards for him in his life and, perhaps wanting for a place to feel heard, he made these tapes. While the family seems beholden to a sort of normality, there is a sense that perhaps dysfunction is native to the “normal” Irish family. Perhaps this was the inspiration point for the play, but it’s certainly not a well mined inspiration within the film.