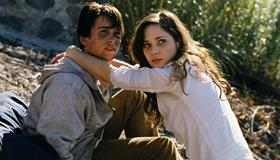 Huck Finn, it ain’t. Go-Getter writer/director Martin Hynes spells that out in the opening moments of his stylish sophomore effort, when an intelligent teen named Mercer skips out on an AP class discussion of Mark Twain’s Adventures of Huckleberry Finn to instead steal a station wagon and set out on a meandering road trip. Still, The Go-Getter is a spirited installment in the tradition of (river- and/or) road-trip stories stretching back to Huck Finn, one which has enough built-in indie cred—courtesy in part to a score from Zooey Deschanel’s She & Him producer/partner M. Ward—to attract arthouse auds.

Thumbsucker ’s Lou Taylor Pucci, who won awards at the 2005 Sundance and Berlin film festivals for his star turn in that indie dramedy, turns in another impressive performance here—neutralizing not only the unlikely name Mercer but also the sounds-super-contrived set-up. In short, as Mercer is blowing town in his stolen station wagon, its velvet-voiced owner (Deschanel) rings him up on the cell phone she left on the front seat. When he promises to return the car “after the trip,” she shouts, “There’s a trip ? Oh, Jesus Christ.” Yet, she subsequently strikes a preposterous bargain with Mercer, allowing him to keep her car as long as he calls regularly to keep her in the loop.

And, yes, of course they fall in love over the phone. But, no, it’s not utterly unbelievable—thanks to a pair of perceptive perfs from Pucci and Deschanel and to the stylish storytelling of Hynes, who employs playful visuals to flesh out their cell-phone conversions.

The narrative drive here, however, comes from another tried-and-true trope: the search for a long-lost relative, in this case, Mercer’s half brother Arlen (Jsu Garcia). The prodigal lad stormed off 14 years earlier, see, and is as such unaware that their mother recently passed away. As Mercer tries to retrace Arlen’s steps, he learns more and more about the older dude’s unseemly life in-between getting sucker-punched by a hippie potter (Nick Offerman) and bailed-out of a messy situation by a traveling salesman in a white hat (a hilarious Bill Duke). The latter is a terrific character, a believer in a bare-knuckles brand of “natural protection—like Jesus and red blood cells” who also carries a knife that was a “confirmation present” from his parents.

Also memorable is a strangely gentlemanly pornographer who goes by the pseudonym Sergio Leone (like the white hats, one of Hynes’ plays on Old West iconography). The amusing misadventure that leads Mercer into Sergio’s studio ends with our hero stealing the principal tool of the pornographer’s trade, his camcorder, and sprinting out. Looking back over his shoulder, Mercer is dismayed to see the street empty. “It’s kind of disappointing to not even be chased,” he admits.

Given proper promotion, however, one can see Mercer—and The Go-Getter —getting chased down by appreciative arthouse audiences.