close
Shyamalan's Happening is a relatively affecting look at the apocalypse 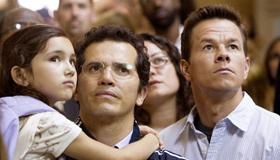 Since his directorial debut The Sixth Sense, more naysayers than yeah-sayers have spoken out on M. Night Shyamalan. Many insist his Unbreakable (often nicknamed Unbearable ) signaled a downturn in his ongoing body of work. Still, his projects, while often overly obsessed with semi-religious issues like prophecy and end times, are affecting, and this entry, a proto-messianic saga we might otherwise call “when nature attacks,” is just as strongly made as his previous middle-ground efforts like The Village or Unbreakable (which I didn’t think was so bad). Still, box office on this film could get stuck in the middle ground, though audiences should be comprised of as many willing dissenters as fans.

The Fincher-style opening titles float amidst the clouds in a slowly darkening sky. For Shyamalan’s first R-rated film (which boasts a surprising body count), the world of the film is awfully bright. This is one of many smart choices. After a moment of disorientation in Central Park, during which a woman offs herself with dizzying certitude, we see men mingling at a construction site just before a surplus of workers drop like rag dolls to the sidewalk.

Elliot (Mark Wahlberg) is a high school science teacher with a lackadaisical wife named Alma (Zooey Deschanel). He’s the “good guy” variety of teacher who uses wit and old-world common sense to maintain the interest of his students. Shamelessly theme dropping, Elliot dialogs with his class about “where the bees went,” and oh-so-scientifically concludes that sometimes nature does stuff we can’t explain. (This leaves a funny, intelligent-design-y, bad taste in the mouth.) When told (by principal Alan Ruck) to evacuate, his math teacher buddy Julian (John Leguizamo) reveals that Alma was “never ready” for marriage and later, when he sees her at the train station, Julian tells her he’s really glad she chose to escape Armageddon with them. While I’m less inclined to compare high school and the apocalypse, it’s not hard to see Elliot as something of a mountain climber. I mean, taking on bored teens is one thing, but marrying a bored 25 year old, that’s another tragedy altogether.

Elliot, Alma and Julian make their way out of Philadelphia with Julian’s daughter Jess (Ashlyn Sanchez). Due to traffic, Jess’ mother can’t make their train out of town, and when the four get stuck in a Podunk town, Julian opts to go back for his wife. The heroics in these scenes are beautiful: Men and women acting calmly, reassuring those around them that we’re all still humans, here to care for each other, distracting their frightened neighbors with mundane crap like math riddles and the magic of mood rings. It’s not wildly original stuff, but it’s beautiful nonetheless.

Elliot, with the help of a nursery owner, thinks he’s come up with some sort of rhyme/reason for the emergency and survives with Alma and Jess surprisingly well using his speculative theories. An odd but exciting turn by stage/screen veteran Betty Buckley as a widowed, fundamentalist shut in plays upon a slight theme of interpersonal trust, and in this rural farmhouse environment echoes the no-one-is-safe-or-sane philosophy of George Romero’s Night of the Living Dead. This isn’t just a horror of the apocalypse, in that science or nature is attacking us for (we can only presume) our sins, it’s a big ol’ warpy mirror held up to the people who smell smoke in their own kitchens and point fingers to arsonists. The news calls the tragedy the “work of terrorists,” but the didactic scientists whose speech concludes the film puts the blame squarely on our cruelty to the environment. It’s a touch heavy handed, but instead of looking like a plea for Al Gore’s affections, it comes off as wobbly but sincerely concerned.

Portraying moments of drama and danger with a Hitchcockian lack of ceremony, Shyamalan's mundane depictions of tragedy create a quiet but weighty resonance. This evenhandedness is in palpable contrast to the more melodramatic turns taken by the plot later down the line. Ultimately, though a cataclysm of epic proportions is overtaking the entire Northeast, the drama occurs on a small scale. So while moments of The Happening feel like they ape more epic apocalyptic movies like War of the Worlds, the unrestrained tendencies of such stylistics are wisely contained in the service of smaller, more personal catharsis. Take, for example, the side story of Alma’s “tiramisu date with some guy from work” who now calls her obsessively. When she finally tells Elliot about her non-date, he’s hurt, but later tells her about this really hot pharmacist whose attention he tried to gain by feigning a cough and almost buying “a superfluous bottle of cough syrup” (perhaps the best bit of dialog in the whole film). Her reaction is priceless and grateful, but not held onto for so long as to inspire a melodramatic response in us. The magnitude of the exchange is deep, but never breaks the skin of the film. Terse bits like that stand in counterpoint to scenes like Julian’s departure, during which he tells Alma not to take his daughter “unless she means it.” (And to each actor goes his moment in the sun.)

Though the film features plenty of running, bloodshed and adults acting without the benefit of common sense, the gravity of the situation is irksomely light. In tandem to the buoyant tone, Shyamalan’s childlike obsession with ghosts seems to wane in its import here, while his attachments to haunting remain strong. It’s as if to suggest he lets stories stand in for the less (than) physical threats of our previous evildoings. Perhaps, he’s suggesting, this is what we’ll have left, or perhaps, this is all we have now.