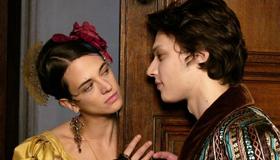 This handsome period drama, full of dangerous liaisons in 19th-century Paris, comes as something of a surprise from French director Catherine Breillat, who previously has focused on more contemporary sexual mores in such films as Romance, An Anatomy of Hell, Sex Is Comedy and Fat Girl. Far from being lost in the lavish costumes and courtly trappings, she recounts an amour fou with equal precision, delivers bristling dialogue and devises some no-holds-barred sex scenes to lend added spice and maintain the Breillat hallmark.

The young nobleman (smoldering newcomer Fu’ad Ait Aattou) finds that on the eve of his nuptials to Hermangarde (Roxane Mesquida), his scandalous and libertine past comes back to haunt him. The troublemaker is a Spanish adventuress played by the seductively wicked Asia Argento. Many of his indiscretions unfold in flashback, as the young buck relates his life with his old mistress to his fiancee’s curious grandmother (Claude Sarraute). Breillat’s concoction of an intriguing labyrinth of desire, passion and bubbling emotions exert a powerful grip.