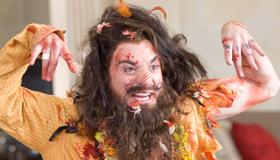 Whatever alleged perfectionism drove Mike Myers to pull the plug on his own intended spinoff of the SNL “Sprockets” sketches, it clearly played no part in pressing him to pursue The Love Guru with reckless abandon. Outdated, unfunny, juvenile and at times downright perplexing, the intended New Age satire comes off more like an over-expensive schoolyard prank; bathroom graffiti come to life across an 86-minute, patience-straining running time. Those bold and bored enough to risk it will likely walk out feeling more drained than entertained, calling into question the judgment of all involved—from studio brass down to Myers—and why they could not clearly see just what a dismal failure they were bound to have on their hands.

The title character—Myers’ first new creation since Austin Powers more than 15 years ago—is an American-born, Indian-raised love master named Guru Pitka who comes off like a phony Dr. Phil trapped in the body of Maharishi Mahesh Yogi with the sensibilities of Benny Hill. Moreover, he’s a love guru who’s never known true love—or at least the physical expression of it—thanks to an iron chastity belt given him by his own guru (an embarrassingly bad Ben Kingsley) while still a boy. Nonetheless, his expertise is regarded as second only to Deepak Chopra (which haunts him terribly), an imbalance he hopes to correct by successfully patching up the marriage of Toronto Maple Leafs star scorer Darren Roanoke (Romany Malco), whose wife (Meagan Good) has left him for L.A. Kings goalie Jacques “Le Coq” Grandé (Justin Timberlake). Along the way, however, Pitka starts to make his own belt-denting love connection with the team’s owner, Jane Bullard (Jessica Alba).

Myers has typically been good at forging his own personal fixations into broad, commercial comedy, but the elements here simply don’t mesh. Myers and co-writer Graham Gordy are at least 10 years behind the curve in mocking the New Age self-help movement, and completely out to lunch in believing that their preoccupation with the Toronto Maple Leafs, who haven’t won a Stanley Cup in four decades, will translate to anyone other than diehard Canadian hockey buffs. The jokes that stitch this mess together are even worse—genitalia puns, pre-pubescent poop and snot jokes, and even more midget humor, once again at the expense of Vern “Mini-Me” Troyer.

The cameos and the off-the-cuff musical production numbers that felt fresh and spontaneous in the Austin Powers movies show up here, too, but this time they feel more like desperation, old tricks that just don’t fit in this very empty new bag.

First-time director Marco Schnabel—formerly a second unit director on Meet the Fockers and Austin Powers in Goldmember, among others—is also exceedingly out of his depth. Lacking any sense of timing or pacing, his lugubrious staging and stagnant cutting drags an already unfunny comedy down to a level of lethargy so extreme that audiences may end up yearning for an intermission.

It would, of course, be overreaching to suggest that Myers has lost his touch—nothing here suggests that this is anything but a dreadful miscalculation which Myers can hopefully correct the next time around by refocusing his energies and recharging his pop culture batteries.