close
Scott must fend off transfer from Quebec to secure Promotion 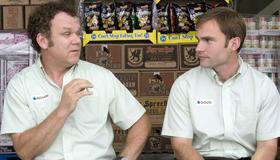 In this winning but soft character comedy, two assistant managers of a supermarket compete against each other for the approval of the chain’s corporate suits when a snazzier store is being built nearby and a position for manager is on the line. Low-key and sweetly funny directorial debut for screenwriter Steve Conrad ( The Pursuit Of Happyness, The Weatherman ) essentially has the same plot as the broader and raunchier Employee of the Month, but chooses to gently emphasize human foibles instead. Presence of American Pie ’s Seann William Scott and Walk Hard ’s John C. Reilly might indicate a less cerebral comedy, drawing an initial crowd looking for more obvious laughs that they won’t find in abundance here. With killer summertime competition, box office prospects may be iffy for a small movie that deserves better than it’s likely to get.

Doug (Scott) is a married, hard-working mid-level employee at a local Chicago grocery, and a front-running candidate to become manager of his company’s newest store. Even though he is cheered on by his current boss (a droll Fred Armisen) and assured he will get it, surprise competition arrives in the form of Richard (Reilly), a transfer from Quebec who suddenly makes it a two-man race in the eyes of the corporate executives, who pit the pair against each other in a rather bizarre contest to see who can look the best in front of the big boys. Tension mounts as Doug and Richard go for the prize and try to prove their worth at any cost. This leads to some fairly amusing moments, particularly from Reilly playing a Canadian transplant who tries to seem smarter than he actually is. His slippery excuses in a scene where he must explain his screw-ups to the gathered “suits” is a marvel of comic acting. A parking lot confrontation between the two also manages to expertly mine knowing laughs without resorting to the kind of over-the-top antics most screen comedies crave these days.

Conrad, whose screenwriting career stalled for a decade after his 1993 debut Wrestling Ernest Hemingway, hit a recent resurgence with Nicolas Cage’s similarly quirky The Weather Man and the Will Smith hit Pursuit Of Happyness, is clearly a director who leaves the flash at home—instead focusing on character development and recognizable realistic situations audiences should be able to identify with. Although pacing and rhythm of some scenes are wildly uneven, this is a respectable debut behind the camera and a smart independent comedy that needs strong marketing to find the kind of savvy audience willing to give this odd duck a fighting chance.