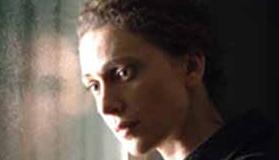 A hammy, phony thriller that’s inexplicably reaped awards, The Unknown Woman ’s box office success will be given a boost by the name recognition of writer/director Giuseppe Tornatore ( Malena, Cinema Paradiso ), but the film’s questionable ethics might put a blot on his future efforts.

Tornatore is best known stateside for the treacly but affecting Cinema Paradiso. Here, he seems so determined to break from his reputation that his latest film opens with three prostitutes in thongs. One of the ladies is Irena (Kseniya Rappoport), a curly-haired, long-legged Ukrainian, and she’s pissed. Flashing forward to the present, Irena’s dyed her platinum locks brown and has moved to an xenophobic Italian town with designs on getting inside a posh apartment building and into the employ of Valeria and Donato Adacher (Claudia Gerini and Pierfrancesco Favino) as a maid and nanny to their daughter Tea (phenomenal child actress Clara Dossena—if she spoke English, Dakota Fanning would probably pull a Tonya Harding).

Tornatore’s torpid melodrama manages to be both withholding and overdone; we don’t know exactly what horror show happened to Irena until the last 10 minutes, but we’re sick to death of the hazy flashbacks of her being bound and raped that he wedges in at any excuse. The sound of Eurotrash techno: Flashback! A driving lesson through a street of street walkers: Flashback! This isn’t just lazy storytelling, it’s an offense that undercuts the film’s supposed raison d’etre. We’re supposed to be outraged at the idea of Eastern European women being sold into sexual slavery, but Tornatore’s feminism is called into question with every gratuitous and titillating shot of Irena, naked and sweaty, with a woman in bondage being whipped behind her. Like most male filmmakers dabbling in the rape-revenge genre, Tornatore and co-writer Massimo De Rita want to posture as empathetic heroes while getting their leading lady out of her skivvies—there’s nothing bold about taking a stance against human trafficking.

What’s offensive about this and most rape-revenge films is that they mistake vengeance for empowerment. The real message is that women are prisoners of own victimhood. Here, Irena cleans floors for pennies a week, having signed over 50 percent of her income to the building manager who gave her the job, just to get a step closer to the Adachers. Her hell is both past and present. That we aren’t sure how much she’s both victim and villain carries us through the first act—she paralyzes the Adachers’ current housekeeper (Piera Degli Esposti), carries around a suspicious amount of cash and is getting stalked by a thuggish bald man (Michele Placido) who seems to feel justified trashing her apartment. A lot of the suspense comes from whether or not she’ll get caught in the middle of something cryptic and seemingly stupid, say breaking into the Adachers’ at night or following Tea to school; Tornatore works to earn our tension, but assumes he’s got our emotions for free. The big twist isn’t simply what happened to Irena, but how wrenchingly bad it was—even though it makes no logical or narrative sense given some even earlier flashbacks showing Irena as a happy hooker in love with a construction worker (Nicola Di Pinto). This year, films like Funny Games and The Strangers have taken heat for being empty excuses for torture. At least they presented themselves with a knowing wink; The Unknown Woman swaggers in like it deserves a Nobel.