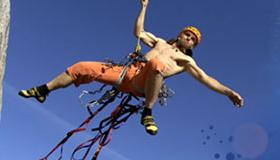 It’s bros before bruised toes in this rah-rah doc about two rock-climbing siblings determined to set world records. They don’t, and that’s fine. But Pepe Danquart’s flick misses an opportunity to retool them as will-bes instead of should-bes, and as a result the film traffics in platitudinous inspiration. Gorgeous scenery grokking could lure in a few vicarious athletes and nature lovers who won’t see Danquart’s incuriosity for the trees.

The “Nose” of El Capitan in Yosemite is a scenic cliff 3,000 feet high. For rock climbers, that’s over half a mile straight up—or worse, straight down. The average climber scales the Nose in three to five days, pausing to nap in their ropes like dangling spiders. Brothers Thomas and Alexander Huber aim to reach the top in two hours and 47 minutes, setting a new speed-climbing record. Danquart’s documentary follows their month-long attempt in hopes of making a piece about success and sweat. It’s long, hot stretches of ropes and pulleys and tiny spring-mounted clips that can't possibly hold the weight of two muscular Germans, yet do. The brothers rise early and work without pause like the good grasshoppers in an Aesop’s fable. But after all that, they fail. And then they try another mountain in Chile, and they fail at that, too.

It isn’t Danquart's fault that his subjects couldn’t match his documentary’s aims. But it is his fault that his film refuses to acknowledge it. The story of two, solid, deserving athletes who flop can be beautiful in what it says about perseverance and dreams. Yet they aren’t presented as humans; they’re presented as icons, and they don’t measure up. His efforts to nail them in place feel false, like an inspirational poster of a crash-landed eagle that says, “SOAR!” Danquart can’t ask tough questions. Instead, he fills the silence with sound bites about how rock-climbing is “hard!” and “thrilling!”—known truths to anyone who’s watched a Mountain Dew commercial—and shoehorns in reenactments of their middle-of-the-night climbing nightmares. Though inessential, these are beautifully shot sequences in a film that, thanks equally to nature and technology, is a visual stunner, all sizzling stone and popping flora. (The cinematography would make Ansel Adams kill for an HD camera.)

The documentary is half over before the brothers emerge as different personalities. They could pass for twins, but the reason they’re easy to confuse is that we’re not given any biographical details to cling to. Fifty minutes pass before they confess that they’re competitive. It’s a full hour before we learn in passing that Thomas has kids, whose names, ages, genders and mother(s) remain unknown. If the film doesn’t care about his family, why would we? Thomas and Alexander are athletes, not poets, but their inexpressiveness stagnates. Their rote pontifications on risk insist that they’d rather be dead than bored. Yet we're bored. During their frigid Patagonian exploit, the monomaniacal Alex clashes with his more talented younger brother, but the fireworks are kept offscreen. (Was Danquart worried of burning down their wooden sainthood?) Tension and passion are flattened into silence.

Earlier, the brothers are posed with an old-timer climber who tries to interest them in his story of being the first to rappel down the Nose, only to be met with blank disinterest. As more respect should be given to the first than the failed fastest, their film deserves no better.