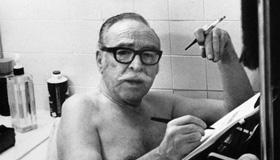 Based on Christopher Trumbo’s play about his father Dalton, this documentary looks at the blacklist period in Hollywood from the perspective of one of its most talented and high profile victims. More successful at evoking sympathy for Dalton Trumbo than offering a detailed study of the Red Scare vis-à-vis the screenwriters known as the “Hollywood Ten,” it nevertheless provides a fascinating introduction to the always-relevant topic. Deficits and excesses aside, Trumbo constitutes required viewing for students of mid-20th century American film history and the First Amendment as it relates to artistic freedom.

When he was called before the House Un-American Activities Committee, Colorado-born Trumbo was as close to the top of the Hollywood food chain as any writer could be. A novelist and prolific screenwriter, his script for Kitty Foyle had been nominated for an Oscar in 1940, and he would go on to pen such notable movies as Roman Holiday, The Brave One and Spartacus. Trumbo was one of 10 scribes—among them his close friends Ring Lardner Jr., Lester Cole and Edward Dmytryk—who defied the committee by declining to answer any questions about their political views. Not only did the studios blacklist Trumbo for 13 years, he was convicted for contempt of Congress and imprisoned from 1950 to 1951. To recount the toll on Trumbo and his family, director Peter Askin makes use of numerous interviews Dalton gave during his lifetime, excerpts from HUAAC hearings, plus testimony from his children, various associates and two experts on the blacklist and the movie industry.

We learn that Trumbo followed his parents’ lead in considering an individual’s political beliefs and affiliations to be a private matter and any official inquiry about them an invasion. Presumably, that’s why the film doesn’t delve into his politics and the fact he was deeply involved in left-wing causes and a member of the Communist Party. It doesn’t explain the reticence to explore other pertinent issues concerning the Hollywood Ten, however. A certain amount of simplification goes with the territory, and because this is a hagiographic showcase for Trumbo’s personality and example, it’s not surprising we don’t hear anything truly critical about him. I wanted more analysis of the content of his movies, beyond the clips we see of those works that directly relate to the blacklist, including Johnny Got his Gun, Papillon and, of course, Spartacus, which is held out as a pure distillation of this documentary’s themes and Trumbo’s life. I suppose refraining from explicating the movies themselves is in keeping with a Marxist emphasis on the means of production (as opposed to the product itself) and on how the blacklist denied people the right to make a living by barring them from the means of production.

Trumbo’s blacklist ordeal officially concluded in 1960, and he continued to work until his death in 1976. He possessed the natural ability and courage to defend his right to write, and the ideal of free speech in general, colorfully and at length. Given the verbosity of his subject, Askin can be forgiven for not knowing when and how to end Trumbo.