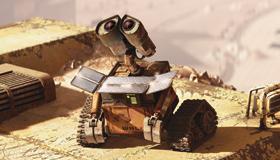 The men and machines at Pixar have outdone themselves with WALL-E, the best comedy, the best romance and the best space adventure to come along in eons. A tale of two robots in love who save the planet Earth and the human race, this mesmerizing computer-animated work is both otherworldly and firmly rooted in cinematic tradition, freshly elemental and awesomely complex. Any movie that salutes Hello, Dolly! and 2001: A Space Odyssey, conveys a green message and imagines a dystopian sci-fi future in which Fred Willard is the nefarious corporate overseer deserves all the superlatives it gets. WALL-E should be considered the early frontrunner for the Best Picture Oscar and a shoe-in for Best Animated Feature. Monetary returns could go supersonic due to its pan-demographic appeal and the fact it can sustain, indeed cries out for, repeated viewings. Based on this picture alone, the $7 billion Disney paid for Pixar was a steal—certainly when considered from a creative standpoint and perhaps even literally.

WALL-E stands for Waste Allocation Load Lifter Earth-Class and our hero is the one extant model in the year 2810, left behind when humankind abandoned the sphere because it was overrun with garbage and too toxic to sustain organic life. WALL-E is essentially a trash compactor and, shadowed by his little buddy, an indestructible cockroach, he spends his days building skyscrapers out of waste cubes, gathering knickknacks and listening to the soundtrack, and watching VHS snippets of, the 1969 film version of Hello, Dolly! Two songs, “Put on Your Sunday Clothes” and “It Only Takes a Moment,” have him primed for romance, and one day a spacecraft lands and deposits a white oval probe called EVE (Extra-terrestrial Vegetation Evaluator). It’s love at first sight for WALL-E; and he’s got what EVE wants as well—a plant he found sprouting in an old shoe. Eventually, after much sublimely entertaining pantomime and a one-sided romantic interlude, her rocket returns and she takes the plant back to her mother ship. WALL-E hitches a ride. Thus ends the first, essentially silent portion of the movie, with an indescribable adventure just beginning. Eve’s destination turns out to be Axiom, a fully automated cruise ship for earthlings that’s been tooling around space for 700 years. It’s run by a corporate entity called “Buy n Large,” and its human passengers are obese, do-nothing blobs catered to, and completely dominated by, robots and computers.

Further plot recitation risks spoilers, but if any Luddites out there are fretting that machines and technology have taken over the movies and modern life in general, they can stop worrying. Pixar is running the show. The technical skills on display are stupendous, with sound designer Ben Burtt, also the voice of WALL-E, deserving special mention. Facing challenges exponentially more daunting than making a rat chef palatable, the creative team led by Andrew Stanton ( Finding Nemo ) has fashioned a coherent story and compelling characters without, for all intents and purposes, the benefit of dialogue or a verbal language. The genius of WALL-E is how so many disparate influences and different movie titles and genres—silent classics, but also Star Wars, Manhattan, Alien and Titanic to name a few—are incorporated and evoked while creating something unique. Breathing life into Hello, Dolly! —directed by Gene Kelly and starring Barbra Streisand, Walter Matthau and Michael Crawford—could arguably be its most impressive feat.

WALL-E is not perfect, of course. Points can be deducted for its trendy environmental lesson, for how it leans too much on the pair of squishy if melodious Jerry Herman songs and rushes through certain segments, particularly in the first reel. Yet the fact remains, it’s easy to go gaga over WALL-E. Disney is not guilty of having raised expectations. In this case, critics could conceivably do moviegoers a disservice by raising expectations so high that the experience can’t live up. I doubt it. We live in an entertainment universe in which Pixar can do no wrong. What a wonderful world it would be if the talents they manifest here could somehow be marshaled to address real-life problems. How’s that for hyperbole?