close
Wanted owes way too much to over-used narrative constructs 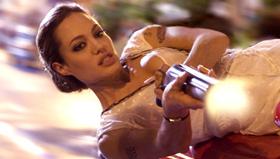 For a summer movie season that has already seen more comics adaptations in a month than typically receive release in any given year, it might seem vaguely academic to invoke the name of Joseph Campbell. A closer look at the season’s narrative constructs, however, reveals a persistent Campbellian substructure so pervasive that, if the renowned professor and mythologist was still alive, might cause him to consider suing for royalties.

While most such films make at least a token attempt to camouflage the derivation, Wanted, the English-language debut of Russian action director Timur Bekmambetov, practically flaunts it. Not that Bekmambetov has ever had any use for subtlety, but when stylistic overkill is folded together with bald-faced narrative plagiarism as it is in Wanted, it’s hard to not feel a certain amount of contempt for the effort. Not that the average fanboy will much care or even notice, but inevitable and unfavorable comparisons to The Matrix and Star Wars will quite likely kill any long-term prospects just as prejudicially as the film’s onscreen assassins kill off their victims.

Based on the Mark Millar/J.G. Jones comic series, Wanted follows the routine beats of a traditional “chosen one” narrative, focusing on a lowly office drone named Wesley Gibson (James McAvoy) whose life takes the most dramatic of turns when he’s recruited into an ancient secret society of assassins to avenge the death of the father he never knew. It’s a colorful bunch, headed by the patrician Sloan (Morgan Freeman) and appropriately sexed up by token female Fox (Angelina Jolie). This is no ordinary gang of gunslingers, however—these people can curve bullets, defy gravity and violate the laws of physics with impunity. Such skills, Wesley is told, can be his as well—they’re in his genes—all he needs to do is unlock them.

The brutality of Wesley’s “training” is the one thing that sets this film apart from its forebears—had either Luke Skywalker or Neo undergone anything this sadistic in Star Wars or The Matrix, it’s unlikely that audiences would have embraced them. There’s also the question of moral equivalency—it’s all fine and well when Fox suggests that killing one can save thousands, but when a climactic encounter puts a trainload of innocents at risk for no reason other than to punch up yet another elaborate set piece, the audience is made uncomfortably complicit in a callous and hypocritical game in which any and all human life becomes secondary to a momentary movie thrill.

Anyone familiar with Bekmambetov’s massively successful Russian films—the graphic novel-based Night Watch trilogy (also including Day Watch and the forthcoming Dusk Watch ) will know what to expect here—it’s essentially the same thing all over again, a mythical battle of good and evil with unsuspecting mortals and their fragile city as the battleground. Most of the action flies by in a flurry  unless it’s so cool that Bekmambetov feels the need to shift into slow-motion to make sure no one misses how cool it is.

None of this would be quite so offensive if Wanted were the first and only film this year to tread well-worn ground, but coming mere weeks on the heels of The Chronicles of Narnia: Prince Caspian and the more family-friendly Kung Fu Panda, both of which tell almost exactly the same story, it feels glaringly familiar, juiced-up John Woo superimposed with a Homeric template. At its best, Wanted is fast food, disposable cinema at its worst—and most mercifully forgettable.