close
Word of mouth will surely bring down Zohan

You Don’t Mess With the Zohan 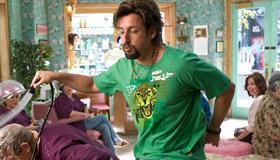 Given Sony’s elephantine marketing push, Adam Sandler’s You Don’t Mess With the Zohan seems guaranteed nothing short of a stratospheric opening. But word of mouth for this sloppy, surprisingly dull comedy should just as quickly bring it back to earth, hopefully terminating any further thought of collaboration between Sandler and director Dennis Dugan.

Dugan, of course, is the former actor—once the star of The Rockford Files spinoff Richie Brockelman, Private Eye —who cemented a career as a director of tacky, tasteless, lowbrow comedies beginning with Problem Child and including such misfires as Saving Silverman, The Benchwarmers, I Now Pronounce You Chuck and Larry and, perhaps most notably, the early Sandler comedies Happy Gilmore and Big Daddy. Riding Sandler’s coattails seems to have been the only thing that kept Dugan’s career going, so Sandler has to bear some of the blame for dragging him along, yet again, to run this one right into the ground.

But there are also broader problems that go straight to the heart of the premise, the kind of threadbare juvenilia that can tax the abilities of even the most charismatic of stars; and at this stage of his career, Sandler no longer has the kind of caché that can get him a pass on a certifiable stinker.

As Zohan, Sandler is a disco-era throwback, a touchas-shakin’ party animal who earns his keep as a touchas-kickin’ Israeli commando. Called off his Haifa vacation to tangle once again with his arch-nemesis, Palestinian terrorist Phantom (John Turturro), Zohan seizes on the opportunity to fake his own death so that he can finally make his escape from a life of warfare and pursue his real dream  to become a New York hair stylist. Faced with the realities of the American dream, Zohan resigns himself to starting at the bottom, but quickly works his way up thanks to skills that have as much to do with pleasuring women as cutting hair. The good times, of course, don’t last long—the salon’s sizzling Palestinian owner (Emmanuelle Chriqui) is under growing pressure from an urban redeveloper (boxing announcer Michael Buffer) to close shop and skedaddle, while Zohan’s identity is discovered by a bumbling would-be terrorist (Rob Schneider) who assembles a team to once and for all rid the world of the pesky Zionist.

Despite a half-dozen genuinely funny moments—a montage of Sandler working wonders on a bevy of elderly blue-hairs is almost too hysterical for words—the film stumbles along haphazardly without any discernible pace or tone. It’s painfully unfunny and cumbersome for extended stretches, necessitating bizarre story detours to jumpstart jokes that, though funny, often seem completely misplaced.

It’s bad enough that Dugan’s staging is so clunky and pedestrian, but the greater disappointment is the inability of the picture’s screenwriting dream team—Sandler, Robert Smigel and Judd Apatow—to deliver something even a fraction as inventive as what they have previously done separately. It’s more than a case of too many cooks in the kitchen—rather than temper each other’s shortcomings and bolster one another’s strengths, the trio appears to have operated on a principle of including everything and excluding nothing, yielding a 113-minute hodgepodge that feels more like a series of extended sketches than a single, cohesive film.

As usual, there’s a plethora of cameos and walk-ons that help lighten the load, but the film’s strange message—urging Jews and Arabs to put their differences aside and unify against their common enemy, the evil urban redeveloper—leaves almost no room for even Sandler’s residual charm to rise to the surface.

To his credit, Sandler has sought to legitimize his credentials as a real actor these past few years, mixing it up with efforts like Spanglish, Reign Over Me and Punch-Drunk Love while still delivering the kind of adolescent twaddle his core fans—now in their 30s and 40s—presumably demand. What Zohan makes abundantly clear, however, is that Sandler’s best goofing-off days are behind him—a reality to which he will hopefully begin resigning himself if he wishes to age gracefully into more legitimate fare.