You, the Living (LAFF) 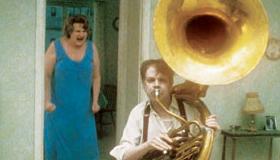 “Tomorrow is another day,” is the refrain of Swedish auteur Roy Andersson’s first film in the seven years since Songs From the Seventh Floor won an Audience Award at Cannes. Made of 50 short, stiff scenes of human behavior, shot as dispassionately as wildlife, Andersson is either stretching the definition of cinema or returning it to its roots when audiences packed nickelodeons just to watching footage of strangers exit a train. An award-winner itself, You, the Living has built up a strong European fan base and has the prestige to become a cult favorite with cineastes.

Each segment captures a tableau of life: A man’s wife hates his tuba, a man misses an elevator, a woman sings about wanting a motorcycle. It sounds like an assembly of sad sacks and oddballs, but we’re aware those labels could be slapped on us, too, if our days were edited into 60-second chunks. There’s pathos and anger and resignation, all muddled up and forcing the audience into giggles, although the people themselves don’t see the humor and Andersson isn’t copping to it. After a scene in which we chuckle at a schoolteacher who weeps in front of her first graders because her husband called her a “hag,” we’re primed for laughter when a man stuck in traffic turns to the camera and tells us about a nightmare. On trial for failing the old tablecloth-pulled-out-from-under-the-dishware trick at a family dinner of strangers irate at the loss of their 200-year-old china, he’s sentenced to death by a group of judges quaffing beer and floating out their verdicts for approval. But when Andersson pushes the scene to its terrible conclusion, in which the whimpering man is strapped into the electric chair and offered the kind, but useless advice to “think of something else,” the film achieves a guilt-giving transcendence.

Andersson’s deadpan cross section of humanity is so observational that the camera doesn’t even move. At its most interactive, the lens rouses itself to zoom no more than a foot, except for one scene where it tracks a man as he walks across a banquet hall of singing Swedes whose shared jubilee song feels like a cultural artifact Margaret Mead would have studied. Though the film took three years, every shot was filmed in one take, lending it a tentative air that balances out Gustav Danielsson’s determined cinematography, where the lighting is flat and florescent and the sets minimalist and green as though a marine layer had covered the town. Two-thirds of the way in, our emotional energy flags; Andersson’s withholding has made us pour ourselves empty in an effort to connect with his giant and (mostly) nameless cast, and the movie’s most familiar face—a teen girl obsessed with her favorite rock star—is also its most tiresome. But you exit the theatre feeling drained and open, eager to walk down the street and really look at strangers for the first time in ages.