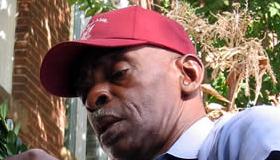 It’s tough to sell almost 80 minutes of horticulture. Down South, there is a man who, after 35 years working 12-hour shifts on the assembly line at a local cannery, took a Walden sojourn and turned his acreage into something amazing. A Man Named Pearl gazes closely at this elderly weed-whacking wonder and widens the lens to introduce a boondocks town whose second wind was achieved due to the resulting word of mouth. Taking in Pearl Fryar’s stories and trailing him on his regular shearing duties is watching an artist at work. All prognostications suggest a favorable harvest on public television—but enough care could keep roots intact for a long run on the silver screen.

In the dead of night, there’s a man with a trucker hat scaling a tall ladder to trim some hedges. Meet Pearl: a modern day Johnny Appleseed whose well-worn hands and face reveal how much the hard hours on the clock tallied over his almost 70-something years. Aside from hanging up the outdoor gear in favor of a suit for Sunday service, the man will wait to sleep until he’s dead. His muse is the nature he’s tamed. The topiaries in Pearl’s backyard are a spectacle drawing busloads daily. And the work has stumped specialists in the field, behooved curators at museums, professors and youths who marvel at his self-taught skill. The wildly groomed greens provided film scouts for Tim Burton’s Edward Scissorhands with enough firsthand tutelage to produce plastic remakes for the hit.

There are many towns in America like Bishopsville, S.C.—a once-thriving spot where farming provided a quality of life for families to pass down to future generations. Agricultural obsolescence resulted, and Main Street witnessed ghost-town lows. Somehow, Pearl’s handiwork and success precipitated a renaissance. The town is “on the map”—a destination again—enticing everyone from Japanese to European visitors on holiday.

Gauging perspectives from Pearl’s pastor to would-be artists at a local college to neighbors, all seem to be on this kick that Pearl built a wonderland. Up close, the sphere- or cube-shaped hedges compel a Versailles level of respect. But this is not Louis XIV’s digs. Everybody is moved by the fame their “unhinged” neighbor has garnered, and many subsequently got the landscape bug and created small-scale topiaries of their own.

The doc emphasizes Pearl’s past, one that embraced hard work. A son of sharecropping parents, Pearl worked the cotton fields and promised his father he would be someone. And, in his own right, he is—he’s a celeb at his evangelical church, he has a breakfast named after him at the local waffle house (where he sculpted a couple of topiaries in the front), he’s a mentor to countless kids and he’s a heartthrob to ladies who enjoy gawking at his sculpted body.

Scenes are broken up by famous quotes in super titles by some of humanity’s greatest doers (Einstein, Washington, et al.), but there is not enough to make this film much more than a feel-good afternoon special. The directors do delve into the racial inequities that Pearl faced as a black man moving to an all-white neighborhood in the rural South, but you can only draw so much from this while he wheels his John Deere. Where’s the conflict? Maybe it’s the fact that Pearl’s artwork is a living organism and could die if not preserved by the right people. And this is amplified by interviews with art critics and credentialed academics. But what about the one or two moments when all is not so sunny? Did any plants die in the making of this film? Were there any weeds that became too much to trim? Everything is just sort of on cruise control. Sure, the quirky boy-meets-girl thread in Pearl finding his wife Metra is sweet, but what about some rainy days where he has to sit inside and simply stare out at his topiaries?

The film’s score is a mixture of jazz fare and a couple of ditties that resemble Mister Rogers’ theme song. The camera work is restricted to panning shots of the lawns and town and not much more. The film is about the interviews with townspeople and tourists and, of course, Pearl. He can hold the film together, but the filmmakers must have tossed him some softball questions because not a lot digs beneath the topsoil.

Despite the kid-glove questioning, the film ends on an uplifting sentiment. Here’s a self-taught artist who determined to do something uncanny and has the selfless sense to give all his tricks and ideas away for free rather than preserve the secrets for some exclusive inner circle. There is nothing fake or forced when you see him talking to kids and sharing with them his opulent opus.

Though the short-handled shovel can only dig so deep, reducing what could have been an intricate excavation of this gardener’s inner space to something merely myopic, there is nonetheless an intoxicating giddiness here. And the man with a woman’s name does a great deal to frontline masculinity at its best.