close
These Stories are only for thick-skinned arthouse audiences 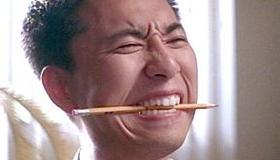 Bold films confront racism; great films do it with class. This odd low-budget comedy from debut writer/director Ron Oda (yes, that means there’s no Book 1 or 2 to catch up on) initially seems to sidestep stereotypes altogether to offer up a modest flick for arthouse audiences, but the film’s shift towards a more confrontational tone won’t play well with the thin-skinned.

Oda presents us with Jim Lee (James Kyson Lee), a sullen businessman who’s a jilted fiancee first and penny-pinching Chinese-American further down the line. His lady of five years, Kathy (Lauren Kim), has dumped him right before their wedding, and so Jim lurks in his apartment drinking champagne by the case, mooning over photos and living in his tux like the male Miss Havisham.

Jim’s rescued, somewhat, by two of his buddies: co-worker Ed (Luis Fernandez-Gil), a Nicaraguan who takes him out to get drunk and tease their Vietnamese bartender (Christopher Dinh), and Alex (Kirt Kishita), his oldest pal who’s a crossbreed of frat guy, gourmet and ex-con assassin. Jim convinces Alex to kill him within the week. Alex consents, but before the audience gets too comfortable congratulating Oda and co-writer Kris Chin for penning a humble, passably-acted dude flick that acknowledges that not all Asians are kung-fu masters, dragon ladies or even geeks, the film ditches LA for the countryside (a better spot for corpses, Alex insists), where the film gleefully gives in to the basest, dumbest white stereotypes since Deliverance.

The yokels of the California outback hunch their shoulders, bug out their eyes, tilt up their chins and act like anyone not white came from outer space. They grunt things like “Is this Chinese toast?” and “How do you say ‘green bean casserole’ in Oriental.” They eat atrocities like ambrosia salad, date dumb women, suck at math, hate the “Japs” and can’t make the distinction between the rest. This could be (deserved) payback for Long Duk Dong, but I suspect Oda has a nobler—if poorly executed—goal of using humor to suck the sting out of racism. In one scene, Jim and his new crush Amanda (Kathy Uyen), a quirky waitress, try to rent a tent from a cholo living in the woods and win him over by yelping “Go Raiders!” and giving him enough money to buy him and his bikini-top-clad girlfriend Morrissey tickets. The joke wins a snort from LA residents, but feels unfair given Oda’s deftness in imploding stereotypes about Asian culture (except to stress that Jim is a “cheap Chinese.”) That the hillbilly pawnshop owner reveals he’s a vegetarian doesn’t count as last-minute character dimensionality—he’s still a racist moron.

These missteps don’t entirely undermine the film’s amiable charm. The best gags come from Alex’s vague hints about how he’ll axe Jim—will it be drowning, stabbing, garroting or poisoning? A confusingly edited climax leaves the audience scratching their heads, but we’re as happy as the survivors are to ditch town for the PC embrace of Los Angeles.