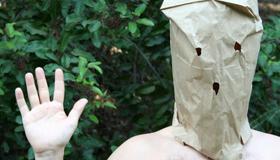 With Baghead, the Duplass Brothers get their butts out of The Puffy Chair that many took to be the throne of the mumblecore movement and take a well advised detour through the outskirts of genre territory. Although it displays some mumblecore characteristics, such as a performance from Hannah Takes the Stairs star Greta Gerwig, Baghead distances itself from the movement by being  well, watchable. Although anything more than a modest take at the arthouse seems less than likely, with the proper promotion from Sony Pictures Classics, this silly hybrid of comedy and horror is sure to best the $195,000 The Puffy Chair rang up at the box office.

Apocryphally arising out of an on-set exchange during the shooting of The Puffy Chair (“What’s the scariest thing you can think of?” “A guy with a bag on his head staring in your window.”), Jay and Mark Duplass’ second feature film gets surprising mileage out of the juxtaposition of the silliness and scariness inherent in their low-concept premise. But the engine that truly powers Baghead is the realistic characterizations of, and authentically awkward interactions between, the quartet of aspiring actors stalked by the titular backwoods boogeyman.

In theory inspired by a post-screening Q&A with an indie auteur who claims to have shot his (hilarious) opus We Are Naked for less that $1,000, Matt (Ross Partridge) and his sidekick Chad (Steve Zissis) convince Catherine (Elise Muller) and Michelle (Gerwig) to accompany them on a spur-of-the-moment screenwriting retreat to an insolated cabin—where they will, of course, concoct a script containing the perfect parts for all four. In practice, however, Matt and Chad seem much more inspired by the opportunity to spend a booze-lubricated weekend alone with Catherine (who has been Matt’s on-and-off-and-on-again-and-off-again girlfriend for more than a decade) and Michelle (who is the not-so-lucky-with-the-ladies Chad’s current crush).

Problem is, Michelle’s actually attracted to Matt. “You’re like my best friend, but also like  my brother,” she soon informs a crestfallen Chad. “You’re my friend and family.” The obvious sexual tension between Michelle and Matt fans the flames of jealousy in both Catherine and Chad, and when a spooky person with a bag over his/her head begins popping up, it isn’t clear if the culprit is one of the spurned partners or someone else entirely.

While not a masterpiece by any stretch of the imagination, Baghead is no reason for the Duplass Brothers to cover their faces with  well, you know  in shame, either.