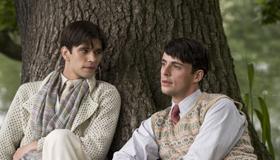 Based on one of Evelyn Waugh’s greatest novels, which spawned a hugely successful television series in the ’80s, this should do business with sophisticated audiences seeking a heady fix of upmarket glamour and costumed decadence populated by an impeccable true Brit cast.

Something had to give when Julian Jarrold decided to compress Evelyn Waugh’s epic novel into a two-hour film. The memorable TV series, with which comparisons are inevitable, unfolded at a leisurely pace over 11 episodes and became cult viewing for devotees.

The film spans three decades (’20s, ’30s and ’40s) and is bookended by World War II. The central thread of the progress of a young middle-class painter and unworldly student named Charles Ryder (played by Matthew Goode from Match Point ) whose friendship at Oxford with Ben Wishaw’s Lord Sebastien Flyte catapults him into a seductive world of wealth, class and privilege—all underscored with dark emotions not far below the surface—remains intact even if the focus has changed.

The emphasis of the pared-down narrative (written by Andrew “ Bridget Jones’s Diary ” Davies and Jeremy “ Last King of Scotland ” Brock) rests on the love triangle of Charles, Sebastian and the latter’s vivacious and spirited sister (Hayley Atwell) while other characters such as Sebastian’s younger sister Cordelia and his flamboyant friend Anthony (memorably created on television by Nicolas Grace) appear only fleetingly.

Emma Thompson makes a deep impression as the devout and ferociously religious Lady Marchmain, the matriarch whose views and beliefs reverberate strongly and tragically in her offspring. She gives the film a strong central core. Michael Gambon plays Lord Marchmain, who comes home to die—with a dissolute bravado—following an exotic exile in Italy, Jarrold also makes more explicit the homoerotic attraction between Sebastian and Charles, a matter Waugh kept suitably ambiguous in the novel. Sebastian sees in Charles a way of escape from the oppressive grip of his mother and their regimented life.

Jarrold uses the stunning Castle Howard estate in Yorkshire as Brideshead, the aristocratic family home, the same location employed in the television series, which— given its indelibly iconic status—probably was a wise move.

Immaculately costumed, designed and set, the film recreates this cross-section of English high society to perfection, although the Waugh purists may feel it misses out on the caustic cynicism that underpinned the original. Nevertheless, its themes of repressed desire, social ambition and religious fundamentalism still strike plenty of contemporary chords and Brideshead may discover a whole new set of admirers.