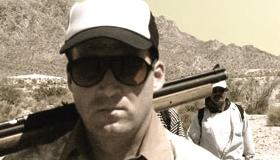 An adventure comedy about two gringos smuggling Mexican immigrants into America that sidesteps the obvious political implications behind its premise. Amusing, but shallow—audiences who trickle in expecting more than a romp will find it's too innocuous to stir up any post-film debates, though they might file out wondering if they should bring a person or two over for some quick cash.

In less turbulent times—say, two years ago—politicians brawled over illegal immigration. Back then, writer/director Brian Peterson's dramedy about two Arizona dudes smuggling Mexicans across the border would have seemed bold just for existing. Now, its odd apoliticism feels under-thought and the film coasts on its pleasant momentum. Peterson stars as Steve, a blonde, square-jawed web-tech millionaire able to retire by 31. Refusing to work for any venture that starts with e- or ends with .com, Steve's bored to death and neither his golf game nor his upcoming wedding to Katie (Carley Adams, in a role that teeters close to bridezilla) provides enough excitement. He's starved for a challenge, so when Katie's mom's housekeeper's son Pablo (Genesis Curiel) gets deported to Mexico, Steve pounces on the chance for adventure, enlisting Spanish-speaking friend J. (co-writer Brett Spackman) into the game. When they realize that their afternoon lark could have earned them $1,500, J. and Steve set up a border-crossing operation, framing themselves as the kinder, gentler coyotes.

There's humor in these pups whitebread approach to felony as they print up brochures and market the American Dream. (They've even set up three price tiers: bronze, silver and—pricies— gold, which also includes a bus ticket to anywhere and a job.) A long stretch where Steve explains all the different smuggling routes he's found plays like a pyramid-scheme infomercial. But when legal and potentially fatal obstacles arise, we're missing Steve's reason for staying in business. He doesn't need the money and broke J., who does, is ready to close up shop after their first week. An interesting, but underdeveloped wrinkle is J.'s ability to "pass" as Mexican, which Steve exploits by making him their frontline operations man. J. does the sweaty work, leading the men across the border; Steve kicks it in a lawn chair and merely gives their clients high fives for arriving. The flick's second misstep is starting with a flashforward of violence at the hands of a rival coyote pack furious that these gringos have cut into its profits. Knowing—not just anticipating—that Steve's escapade will come to a bad end makes his inexplicable resolve seem half as fun and twice as foolish. If the film doesn't care if the two are right or wrong, it at least needs to make us understand why they bothered.