close
Film about a family of cuckoos offers only Diminished success 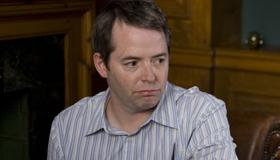 Terry Kinney's high-spirited heart-warmer about a family of cuckoos, based on Sherwood Kiraly's novel and subsequent script, is too labored to take flight. A slog through determined wackiness, it's apt to leave audiences cold.

After a concussion, newspaperman Cooper (Matthew Broderick) takes an enforced vacation to his rural childhood home saddled with a goldfish's memory and a Pulitzer winner's reputation. "I just edited the guy who got nominated," he confesses to teenage sweetheart Charlotte (Virginia Madsen, playing her latest in a series of strong women who find themselves shacked up with losers). At least at the old homestead, he's not the most mentally distressed. Wendell (Tom Aldredge) is in his trailer shooting at strangers and Uncle Rollie (Alan Alda) has strung a typewriter with fishing line as he's convinced the lake's carp are trying to compose poetry. Uncle Rollie's other passion is a vintage Chicago Cubs baseball card in mint condition rumored to be worth 5, maybe 6 figures—hopefully enough to keep Aunt Belle (Lois Smith) from putting him in a mental home. Before you can say "Wacky family road trip!" Rollie, Cooper, Charlotte, and Charlotte's son Dillon (Jimmy Bennett) head to a baseball card convention in Chicago where an increasingly addled Alda is determined to sell the card to the first—not highest—bidder.

With a script this thin and chirpy, shot through with moments of loss, the cast is under dual pressure to balance light and dark. They can't, sticking as a clump to a gray middle zone where none of the jokes zing and none of the tears connect. Broderick is the weakest link, as though director Terry Kinney (who shot the film with the flatness of a sitcom) told him the best way to capture confusion is to blink little and emote less. Broderick looks trapped and disoriented, adrift in his own expanding girth. Alda fares better—a scene where he finds himself mentally and physically lost in the convention center with cash, but no card in his pocket is the one emotional moment that rings true. Token bad boy card collector Bobby Cannavale has the movie's one great speech where he spits that "People who don't know what they got don't deserve it." He's right, but minutes later he's dispatched in a slapstick battle where the climax is...a shoelace breaking. Somewhere in that moment is a zen koan about the sound of enforced hysteria—in my theater, it was the noise of no hands clapping.