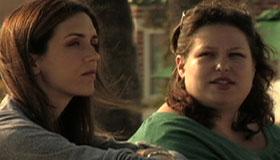 Making movies on a barebones budget carries a certain romance to it. Catering service is a bag of chips and a few water jugs, the talent gets a canopy instead of a trailer and a go-fer is the same guy manning the camera and sawing 2x4s all at once. You wing most of the setups, and hope to God the nine-volt batteries won’t die before the day’s wrapped. But with all the war stories on the making-of, you still have to muster something that is going to stick. In Disfigured, the run-and-gun style of filmmaking finds glory in the most unexpected moments and takes a tumble in the rest. The premise is pretty catchy: an anorexic befriends an obese woman in the narcissistic backdrop of La-La Land. Unsure of itself and never fully developed, the film becomes more of a preachy set of soulless soliloquies caught on tape. The curious might take the gamble, but the bulk of moviegoers will bypass the film entirely and go out instead for a couple of calorie-rich Bavarian crème doughnuts.

At once, you’re tossed into the middle of a roundtable consisting of peeved plus-sized thirtysomething misanthropic gals and a lone guy sounding off on what it’s like being outcast in the svelte-centric modern day L.A. They dish, sympathize and get riled up to the point where they’re gonna take to the streets. They’re all fat, and that’s gonna be damn fine, so you better get used to it. Each has a story to tell. One notable bit was when one recalled how several people were posed with a choice between losing a hand and being fat—most offered their hand. It’s that grim to be overweight. The chorus of sorts, which recalls the same women’s-group intercuts used in Cameron Crowe’s Jerry Maguire, gets to the frontlines of a subset of folks discriminated against because of their portly looks. Each is wounded and forced to build a blubber-thick skin to ward off the injurious insults. The roundtable stuff is pure and bleak and splattered all over the place. It’s a shame that writer/director Glenn Gers decided to feed them lines. They were doing just fine ranting off-script. When Gers plots the leader of the activist group against another member, the failed mutiny attempt just felt artificial.

Lydia (Deidra Edwards) is a hefty woman trying to figure a way through her stagnancy in relationships and life in general so that she can be seen beyond her physical frame. When Darcy (Staci Lawrence), an anorexic, tries to crash Lydia’s Fat Acceptance Group, she is given the boot and scolded for the shenanigan. The spicy mood is intensified because Lydia is unable to fend off the disdain coming from her peers, who lash out at her for advertising a Fat Acceptance Walking Group. The rest of the women don’t want to exercise or fit into some slender pair of Levi’s. They want to be just as they are and to hell with society’s perfect paradigm where every female must strive to look like lanky six-foot 12-year-olds.

Lydia and Darcy are reunited when the first walk takes place at Venice Beach boardwalk, where the former waits for only one sole walker to stroll with her for a few lifeguard stations. Darcy shows up, too, but not to walk. She comes to offer her support and wants to boost awareness with a marketing strategy and just be a good (and slender) neighbor. The approach is at first overshadowed by the lone heavyweight named Bob (Ryan C. Benson) taking the walk as a chance to court Lydia with a bunch of flirtations, leaving her wanting more. Bob then goes home and pays for a prostitute who won’t let him be in the mission position to avoid being crushed. Unaware of his late-night habits, Lydia fancies Bob, and the two soon engage in a lingering physical twirl that fogs-up the screen in more ways than one.

Meantime, the skinny and the fatty share their darker secrets. One can’t handle a bite of pizza, while the other has Dominos on her speed dial. The two polar opposites get into each other’s business. When Lydia passes details of sex, Darcy finds the entire topic revolting, with her quoting that sex is “all very smelly.” At one point, Darcy invites Lydia over to her spot, where she performs a major faux pas by baking cookies. They sit there uneaten.

As the two get closer, it becomes clear that when one’s in need, the other ducks out and wants nothing to do with her. Lydia wants to steal from Darcy’s thin playbook, and Darcy seems to just want to wail to anybody who can bear to listen. When Darcy starts going, the tantrum is more of a panic attack. At one point, she falls into a fetal position to rest on Lydia’s pillowed lap. Who’s helping whom here? They both are desperate for attention and to be heard and each gets to sit and listen to these spiels that go on and on. The chemistry is nonexistent between the two. You wonder why they want to be friends to begin with.

Camerawork at times is shaky and goes out of focus because, predictably, the amount of technical tricks attempted must have been too demanding for the manual lens to keep up. Sound goes in and out—perhaps the boom operator may have been feasting his eyes on the scantily clad talent on the beach for a couple of takes. The characters are often overacting and become too eager to seem convincing rather than allow the emotions to flow as they do when the ladies sit around in their roundtable bitch fest. When catharsis arrives, it’s so damn blaring that it just passes through, almost unrecognizable. The score is pretty much a couple of guitar riffs that speed up or slow down when the emotion dictates. A couple of taps on the piano are also included for whatever reason. Certainly some more orchestration behind-the-scenes could have yielded better tunes, despite budget constraints.

Still, the theme is one that is pretty critical in the modern day, and there are some savior moments when Lydia takes on a derelict who spits insults at her. When she stands up for herself, everything that seemed to have crumbled somehow possesses hope. Life’s not completely bleak. Will you look at overweight people or anorexics differently after viewing this feature? Probably not. But you do sympathize some with the fact that their world is full of complications and stirred by so many psychological elements that it’s impossible for a human being with a conscience to not be clued in? We all have a stake in this. But the film can’t do the arithmetic right to get to a solution on how to tell a straight story without a bunch of forced tangents and gnarly knots that take too much work to sift through.