close
Performances make this look at the penal system stand out 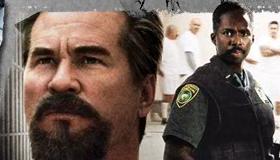 It would be an exaggeration to claim the jailhouse drama Felon makes Oz look like nursery school, but not a big one. The HBO series did far more than depict guards and prisoners as two sides of the same blood-tarnished coin however, and—even accounting for the television medium’s time-generous format—was vastly more interested in character development. So to claim writer/director Ric Roman Waugh’s expose about the American penal system makes Oz look like Shakespeare would be less hyperbolic. We’ve visited this brutal environment before and seen the consequences of the rage it fosters. What makes this stint in the pokey stand out are its airtight performances, which should garner attention and may help ensure the indie a role in future “scared-straight” programs.

Traditionally, a flick like this begins with an injustice, and that fairly describes the murder charge California construction company owner Wade Porter (Stephen Dorff) faces after his home is invaded and he strikes the intruder with a baseball bat. Busy growing his business and about to marry Laura (Marisol Nichols), the mother of his young son, Wade is sent to the big house after the public defender (per usual) convinces him to take a plea bargain. It would have been worth rolling the dice on a jury trial, and his string of bad luck is only just beginning. At the inmate reception center, Wade is jumped, and later, on the bus to Corcoran State Prison, he’s implicated in a stabbing. Refusing to snitch on a badass white supremacist, he’s put in the SHU (Security Housing Unit), where the real nightmare begins.

Overseen by the fiendishly twisted Lt. Jackson (Harold Perrineau, who also played the wheelchair bound inmate and narrator in Oz ), the facility is a hotbed of humiliation and gladiator bouts. The “screws” (guards) encourage racial divisions and place bets on the resulting blood sport as the “caged animals” (inmates), including Wade, perform as expected. Refusing to ally himself with one group, he becomes a punching bag and rubber-bullet receptacle, yet gives as good as he gets. He’s rapidly becoming a hardened con, and the financial and emotional toll on his wife-to-be and son makes his future on the outside, should it ever come to pass, seem bleak.

Salvation arrives in the form of his cellmate, legendary lifer John Smith, played by Val Kilmer. Looking and sounding like a composite of Brando’s Colonel Kurtz and Burt Lancaster’s Birdman of Alcatraz, Kilmer embodies the Zen of incarceration without the possibility of parole. When Smith’s wife and 7-year-old daughter were murdered, he slaughtered the perps and their entire families. He’s mellowed after decades behind bars, and dispenses plenty of wise advice—such as, “love is the most subtle force on earth”—conveying his hard-won state of inner peace. He even puts himself on the line for Wade, demonstrating he’s both suicidal and a really stand-up guy. It’s an enjoyably bloated turn, while Dorff is equally reliable and quite sympathetic. Sam Shepard is fantastic in the small role of an ex-guard who befriended Smith year before and, going against type, Perrineau is utterly believable as the monster of the piece.

Felon ventures outside the prison walls so often that the audience doesn’t get a prolonged sense of the claustrophobia of confinement; the rage being displayed actually dispels the sense of isolation and boredom. The production values are fine—there’s no doubt they’ve got plenty of bleach in the hoosegow, since the inmate’s crisp tee shirts are whiter than white. Waugh—who made his mark as a Hollywood stuntman—has penned a detailed script that doesn’t convey a whole lot of new information about prison life. He lets the system off the hook by making Perrineau’s character certifiable. Structurally, it takes too long for the story to turn and for corruption to be uncovered. The deck is so stacked against Wade, it’s hard to believe anything positive could come of this scenario or even the briefest brush with our penal system.

Justice is almost always served in the movie house, of course, and the cycle of recidivism and dehumanizing mistreatment can be broken. Felon ’s happy if bloody ending includes a title card about the number of people (a comparably outsized percentage of the total population) incarcerated in the U.S. But the statistic is irrelevant unless they’re all being held in the SHU, guarded by a nut job like Lt. Jackson. The moral is obvious: do your utmost not to get sent to prison, and if that doesn’t work, do anything to get yourself out.