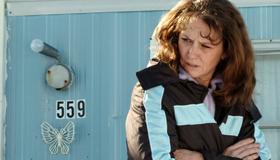 Winner of the 2008 Grand Jury Prize at the Sundance Film Festival, Frozen River is something of an intriguing contradiction—on one level an atypical Sundance film, grittily accomplished and unabashedly self-important, while at the same time refreshingly hopeful and subtly earnest in ways that few Sundance films ever dare. Whether it’s enough to earn an audience beyond the NPR set, only time will tell, though it’s not unforeseeable that a well positioned platform run and smartly targeted marketing could yield sufficiently positive word of mouth to maintain healthy legs well into the fall awards season.

Melissa Leo delivers a beautifully understated performance as Ray Eddy, a single mother struggling to raise two boys in a dilapidated trailer that already stretches her meager income to the breaking point. It’s a hard life made harder by the harsh weather of their upstate New York township, a snow- and sleet-addled community where warmth—both literal and figurative—is a decided luxury. Relations with the nearby Mohawks, whose reservation skirts the border between New York and Quebec, are especially contentious, as Ray discovers when she has a run-in with an embittered Mohawk widow named Lila (Misty Upham), a known smuggler of illegal aliens by way of the reservation. Opportunity and the specter of family calamity, however, help override any lingering animosity just long enough for the two women to cooperate on a handful of cross-border operations that should earn Ray enough to secure that coveted new doublewide for her boys.

In lesser hands, this could easily have become a polemic on the plight of the undocumented or a sanctimonious diatribe about the woes of Native Americans. But writer/director Courtney Hunt keeps her bearings on Leo, granting the actress unparalleled latitude to evolve a character who most audiences might otherwise find unappealing or, worse, unlikable. But Leo’s investment in the character translates. In the end, it’s hard not to empathize with her struggles, even when they are the result of poor choices. It’s a subdued but potent tour-de-force deserving of year-end awards consideration, though it’s anyone’s guess whether the film will garner enough attention to make a serious run at it.

Supporting players mostly take their cues from Leo and, to a lesser degree, Upham, while cinematographer Reed Morano delivers sterling work for a film of any level, capturing the frigid environs with an almost poetic melancholy.

Some will no doubt argue that the film suffers for not having had the resources to bolster its production value where it mattered most—reinforcing a shadowy sense of jeopardy that finally breaks fully into the open during the film’s final third. But Hunt has not set out to make a crime thriller—her concerns need no technical embellishment or cinematic magnification. In the crevices of Leo’s weather-beaten face are two generations worth of hopes and dreams, steadfastly clinging to the possibility that at any moment life—and the titular river meant to symbolize it—will begin to thaw.