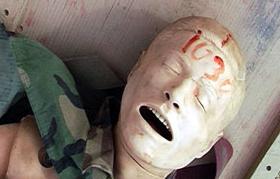 What was Pentagon brass thinking when they let Tony Gerber and Jesse Moss film inside the Iraq Simulation section of the National Training Center at Fort Irwin, California? Probably something along the lines of, “If we let the public see how seriously we take the task of preparing our soldiers, then maybe people won’t judge the war, and us, so harshly.” The resulting movie—fair and objective almost to a fault—highlights the proverbial gap between good intentions and reality, and is arguably the most surreal of the many fiction and nonfiction movies made about this conflict to date. Seeing fake Iraqi and American blood running through the sands of the Mojave Desert will not be a big draw, considering the majority of Americans want the war to end. Had they gone for the sensational rather than simply chronicling the strangeness unfolding in front of their lenses, Gerber and Moss could have ensured more attention and a bigger audience. It’s to their credit that they didn’t, even if the main reason was that they had their hands full.

The last stop for combat units before deployment in Iraq, the relevant sector of the sprawling Training Center consists of 13 mock Iraqi villages. It’s a series of gigantic movie sets, with Uncle Sam employing 1,600 role players, many of them Iraqi exiles, to help create facsimiles of what awaits the troops. Combat units are “injected” into complicated scenarios (designed with the help of “simulation consultants”), while the paid participants acting the parts of townspeople, local officials and terror suspects receive assignment sheets detailing their character’s history and motivation. Insurgent forces are limned by a different set of U.S. soldiers, thus training them to adopt the enemy’s mindset. Anything that might be encountered while patrolling the streets of Baghdad or a provincial village is fair game. There are mock assassinations, executions and civilian casualties. The media angle hasn’t been overlooked; news reports are broadcast and actors posing as journalists from both Western and Arab outlets file stories and pepper officers with questions. When participants are injured, special effects and prosthetic limbs are used to mimic battlefield injuries. Fake memorial services are held for U.S. soldiers “killed” during the exercises.

In 2006, after months of resistance, Gerber and Moss were allowed a two-day visit; they then sought, and were granted, permission to document the full three-week training rotation of one cavalry brigade, which was held in a faux village called Median Wasl. The two director/producers shot all the footage themselves (350 hours) as well as recording the sound. Gerber was embedded with the Army troops while Moss lived in the village. Interspersed amongst scenes from the simulation, divided into seven stages from Occupation to Withdrawal, are interviews with the brigade leader, three Iraqi participants (all San Diego residents) and various other soldiers and facility staff.

I began this review by facetiously questioning the judgment of those at the Department of Defense who signed off on the making of Full Battle Rattle (military slang for a soldier in full combat attire, including protective gear and automatic weapon). In fact, it makes perfect sense for the military to spend the time and money on this type of training; it has probably saved many lives on all sides of the conflict. If such a program didn’t exist, architects of the war would be susceptible to an additional charge of failing to adequately support and protect the men and women of America’s armed forces.

And finally, while you may wish the filmmakers had included fewer scenic shots of the sun setting over California’s high desert and instead played devil’s advocate more often, the impact of Full Battle Rattle stems from its political and ideological neutrality. It can be read different ways depending on one’s view of the legitimacy of the invasion and occupation and of those who ordered and are forced to implement it. Only at the end do Gerber and Moss tip their hand by showing President Bush visiting Fort Irwin and playing audio from his announcement of the 2007 troop build-up. The final images are of the brigade members we’ve just watched in the virtual Iraq boarding a plane bound for the real thing. On the soundtrack, Burl Ives croons the ballad “Cowboy’s Lament.”