close
Harold would work better on the small screen 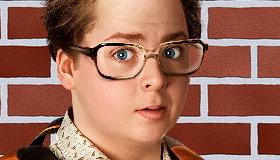 Veteran Saturday Night Live writer T. Sean Shannon makes his big screen debut as co-writer and director of this amiable but tame comedy about a 14-year-old kid who looks and acts about three times his age. In the vein of a TV sitcom like Malcolm in the Middle but not as smart, this limited theatrical release really feels more like a rejected series pilot than a mainstream feature. Should the producers reconsider and do some retooling, they might have a better shot pitching the idea to a network, as star Spencer Breslin is a likeable presence. As for its box office prospects, how do you spell “nil”?

Harold (Breslin) is a nice kid with premature male-pattern baldness, large horn-rimmed glasses, senior-citizen tastes in clothes and an inexplicable fondness for re-runs of Matlock and Murder She Wrote. He’s comfortable being an outcast among his peers, but when mom (Ally Sheedy) announces she’s moving Harold and his attractive older sister (Stella Maeve) to another city, he suddenly becomes the new kid in school—not a good thing when you look like you’re 48.

Picked on by the popular kids, ridiculed by his gym teacher ( SNL vet Chris Parnell), who notices he has more hair on his back than his head, and hit on by the geriatric sex maniac next door named Maude (that’s right— Harold and Maude, get it?), this kid is put through the ringer. There is a nice overweight girl (Nikki Blonsky) and a school janitor (Cuba Gooding Jr., continuing his career slide) who befriend him, but mostly it’s a town without pity for a kid who happens to be different. The good thing is he can buy liquor for the other teens, go to strip clubs and do pretty much everything else a middle-aged guy can do without getting caught.

But what can you say about a comedy that wraps its biggest life-changing moments around a go-cart race?

Written by Shannon and the late Greg Fields, this project has been kicking around for several years and somehow miraculously got the financing to finally get made. Although it’s not terrible, it just feels very dated and more than a little bland, especially coming from writers who cut their teeth on the edgier comedy of Saturday Night Live and In Living Color.

Thank God for Breslin, though, who carries this thing capably on his shoulders and exhibits nice understatement and considerable charm in the title role. Gooding Jr.—forced to wear a dreadful afro wig that looks like something out of Superfly —does his best, but why can’t this Oscar winner find material worthy of his talent? Same goes for Sheedy, who is wasted as the clueless mom. SNL stalwarts Parnell, Rachel Dratch and Colin Quinn add some color, while Suzanne Shepherd as the horny Maude plays it broadly to say the least. Always reliable Fred Willard is in for a scene as a doctor who mixes Harold up with another patient who’s 54.

Shot and lit like a mediocre TV show, the sporadically amusing Harold is a true Blockbuster contender—that is, for the bargain bins of the video store. And soon.