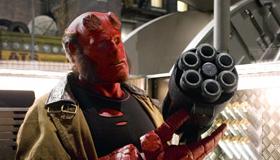 If anyone living in the imaginary worlds of Iron Man, Hulk and Hellboy stand to benefit from this summer’s rash of destructive super-villainy, it’s the demolition and garbage disposal companies entrusted with cleaning up the messes created by these Jolly Rancher-hued heroes. Hancock took a fairly entertaining swipe at this most logical of super-consequences, but if anyone’s actions require a frantic call to their homeowners insurance rep, it’s Hellboy. Or, to be more accurate, it’s the Oscar-nominated writer/director and fanboy-approved sci-fi and fantasy imagist Guillermo del Toro. The Guadalajara-born helmer’s knack for conjuring up imaginative, fearsome creatures with gothic flair and Catholic overtones is truly singular. But here’s the problem: In the original Hellboy, from 2004, del Toro pulled Hollywood towards his sensibilities. In this slightly broader, more eager-to-please sequel, Hollywood pulls del Toro towards its sensibilities. The only time he should have fallen into such a trap was for his Hollywood coming-out party directing, not Mimic, but Blade II. However, with the Oscar-winning success of Pan’s Labyrinth, seeing del Toro in commercial mode again is, while indisputably fun, disappointing—only because we’ve come to expect so much from him. Those disinclined to knock a director for giving fans exactly what they want will be quite satisfied, as will those who enjoyed the first film. Receipts should justify the continuation of the series, which would be very welcome, indeed.

The uninitiated are also invited to the party and brought up to speed via text explaining the origin of Red (Hellboy’s nickname) as the literal spawn of Perdition, conjured up by Nazis during World War II and then rescued by the Allies and raised by the kindly Professor Bruttenholm (John Hurt, who returns for the prologue). As Hell’s only hero, Red continues to be in the employ of the ultra-secret Bureau of Paranormal Research and Defense, the only organization willing to hire someone with skin the color of tandori chicken and a head featuring shaved horns that look like crimson rice cakes. At his side are Abe Sapien (Doug Jones), the lanky underwater alien resembling those sea monkeys advertised in ’70s comic books, and the pyrokinetic Liz (Selma Blair), who is now officially HB’s g.f. One of the original film’s attributes was its humor, notably the funny asides that never overreached. Such is not the case in the sequel. This time, the wisecrackery, written by del Toro (working off a story by del Toro and Hellboy creator Mike Mignola) is more overt, plentiful and, therefore, less funny. Hellboy and Liz bicker like a married couple, which is cheeky, but stale. And worse, after HB’s latest episode of Manhattan mayhem, he’s assigned a new babysitter (replacing the first film’s Rupert Evans). He, or it, is Johann Kraus, a gaseous sentient being encased in a clanky diver’s suit, complete with a bubble top reminiscent of those old Pop-O-Matic board games. As he breaks out the over-the-top German accent (provided by Seth Macfarlane), to scold Hellboy for his unorthodox tactics, Johann becomes, hands down, the most annoying otherworldly creation since Jar Jar Binks.

But what makes these movies go, even more than the monsters or the CGI, is Ron Perlman. He should take this as a compliment: Hellboy is the role he was born to play. Perlman’s got the right physique, the right kind of swagger and the right way to toss off his lines. Red’s a cigar-chomping gumshoe with one hand literally made of stone and he’s impervious to injury (almost). He’s an outsider like Bruce Banner, but HB’s alienation feels only slightly less familiar than that of Peter Parker. Red’s also quick with the gun, which comes in handy when he, Abe and Liz visit a Manhattan auction house and are attacked by swarms of wickedly nasty grey bats, called tooth fairies. Of all the creations del Toro and his brilliant production team have devised, these flesh-eating, flying beasties are the best. They, and the creature with eyes in its wings, are most directly connected to whichever of del Toro’s twisted synapses fired to create Pan’s Labyrinth. As the gang will discover, these tooth fairies were unleashed by Prince Nuada (Luke Goss), an ageless, pasty-skinned swordsman intent on breaking the ancient truce between man and the millenniums-old sons of the earth. Nuada schemes to wrest the planet from the greedy destroyers who’ve ruined the world with their parking lots and mini-malls (that would be us). At the auction house, he claims the first component of a three-piece crown that, when activated, will unleash the Golden Army and insure mankind’s destruction. Not surprisingly, Hellboy has issues with this plan.

You can blame del Toro for the cheap laughs and the superpowers that seem random and convenient, but you can’t fault his ability to stage a rousing action sequence. The battlefield highlight is an epic streetfight with an enormous plant monster that’s a cross between the ridiculous walking tree from The Lord of the Rings: The Second One and the Stay-Puft Marshmallow Man. Yet after the umpteenth monstrosity has come out of the ground or sprouted from beans or congregated at a busy “troll market,” it all becomes CGI white noise. When the Golden Army is finally unleashed, they look over-designed, as if hoping the under-34 crowd would be so excited, they’d have to wear bibs to catch their own drool. Although, truth be told, if a beer-swilling hell spawn must negotiate enormous grinding gears while fighting a long-haired albino who can slice a drop of water in half, let it be staged by del Toro. Because at this point, it’s hard to imagine him not delivering at some level on any assignment he’s given, which the makers of The Hobbit are hoping for, now that Peter Jackson has ceded the director’s chair to del Toro. But in case the pressures of big-budget filmmaking squeeze any more of the effortless wonder and charm from his work, he should remember: In a movie where the ones and zeros throw the summer’s biggest, noisiest computer-generated rave, the best moment in Hellboy II is the one in which Red and Abe, heartbroken and drunk, sing Barry Manilow’s “Can’t Smile Without You.” All the CGI in the world can’t conjure up that.