close
Trevor amounts to nothing more than Friends with gay people 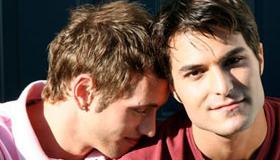 Holding Trevor is a fairly ordinary relationship drama with a smattering of drug abuse, sexual promiscuity and other genre elements—including a cast of gay characters—structured for a gay audience. Trevor (star and screenwriter Brent Gorski) is a handsome and gay young man who’s involved with Darrell (Christopher Wyllie), a handsome and gay young heroine addict who has overdosed more than once and will likely do so again. The storyline concerns what Trevor and his extended family of friends and former—and possibly new—lovers are going to do about that. Big drama ensues, but equal results are less likely at the box office, even for the niche audience at which the film is directed. This stuff is too easy to find on daytime TV.

After yet another breakup with Darrell, who falls off the smack wagon again, Trevor meets another pretty boy, Ephram (Eli Kranski), who is the exact opposite of Darrell in every way—and a doctor, no less. As Darrell spirals into an abyss of drugs and gay sex (which mostly looks like fun), Trevor finds his relationship with Ephram moving too quickly and struggles with what he should do—stay with Ephram, save Darrell? When he approaches his friends for advice, he finds that they are fed up with his obsessions whether they’re called Darrell or Ephram, and that they have problems of their own. Big problems.

This is all pretty much gay sitcom material featuring all the genre characters one might expect; the bitchy queen (Jay Brannan), the asexual fag-hag (Melissa Searing) and the ever-present threat of HIV. The latter is laudable in a time when HIV has fallen off the radar in most communities as the great Magic Johnson gets fatter and fatter.

The rest is an early episode of Friends —with gay people.