close
The 3D in this mistranslation of Jules Verne is still wet behind the ears—and, often, on the audience’s faces

Journey to the Center of the Earth 3D 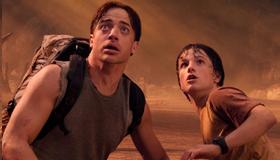 An unfortunate throwback to an earlier era, Journey to the Center of the Earth 3D demonstrates little more than the fact that filmmakers’ use of the 3D technology that exhibitors are extremely excited about is still at an immature stage. Riddled with mediocre money shots that more often than not amount to gimcrack gimmicks, this contemporary action/adventure adaptation of the 1864 Jules Verne novel about a subterranean expedition led by an eccentric academic is family-friendly enough to attract decent crowds, but doesn’t seem set to break any box office records.

Perhaps no single aspect of Journey to the Center of the Earth 3D illustrates its makers’ relative dearth of ideas for harnessing 3D than the fact that the audience is either spit or drooled upon not once, not twice, but thrice during its scant 92-minute running time. (Granted, it’s a tyrannosaurus rex that does the drooling the third time around, but spending who knows how much to capture Brendan Fraser spitting onto the camera after brushing his teeth is a waste by anyone’s calculation.) There are also two separate shots of a yo-yo shooting out toward at the audience, which is at least one shot too many.

The impact of the images improves markedly after the intrepid Trevor (Fraser)—a researcher who has been barely keeping the lights, and the seismic sensors, on in the family laboratory in the 10 years since his more brilliant brother Max disappeared while spelunking in Iceland—finds an annotated edition of Jules Verne’s Journey to the Center of the Earth in a box of Max’s possessions (right next to that damned yo-yo). The cryptic coordinates scribbled in the margins seems to correspond to one of their remote sensors, possibly pointing toward the place where Trevor might finally find out his brother’s fate. Max’s son Sean (Josh Hutcherson)—who has been conveniently dropped off for a 10-day stay with his uncle only minutes earlier—of course demands to accompany Trevor to Iceland, where they hire a looker of a local guide named Hannah (Anita Briem) and promptly plummet into, you guessed it, The Center of the Earth.

There, they discover prehistoric species and trade one-liners that fly right past the “clean” category to land with a thud in the “corny” column instead. Particularly lame is the one when Sean, in the middle of fighting off a school of carnivorous fish on a voyage across an underground sea, suddenly gets a cell phone call from his mother—the signal somehow traveling though, oh, about 4,000 miles of rock. “I think we have a bad connection,” he cracks, as his uncle and Hannah continue to battle the vicious sea creatures.

Audiences’ connection to this gimmicky mistranslation of a sci-fi classic is likely to be similarly spotty.