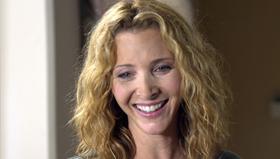 Kabluey is a movie about the war, but it disguises this fact in the deepest of subterfuges: a pathologically inept man inside a large blue costume of no particular distinction save its large, featureless head. Cult actor, writer and director Scott Prendergast is the inept man in the blue suit, and he is plainly a sharp fellow, however, his commentary on the effects of the war might be lost on all but those paying the closest attention. This, combined with an approach that would like to be funny in that uncomfortable way, but that’s mostly just uncomfortable, does not bode well for box office results, even with cultish appeal and the indie cred of Friends alum Lisa Kudrow.

Salman (Prendergast) is a loser and a bit of a freak (for no apparent reason) who ostensibly moves in with his sister-in-law (Kudrow) and her two young sons while her husband (Salman’s brother) is away at war. The war, in this case, is the Iraq War, notable because there are in fact two wars currently being waged—the other is in Afghanistan—by some citizens of the United States of America. Also notable because we are not all participating in the wars, certainly not in equivalent ways, which is one of the notions one suspects the filmmakers may have wanted to communicate in this film. What is definitely in the movie is the story of a family in deep distress because of the husband/father’s extended tour of duty in the war. Kudrow’s military wife is worn well beyond civility. She’s exhausted from the obvious worries of a person whose loved one is in a war zone, from rearing two young boys full of anger and energy, from bills she cannot pay and all the rest. She returns to work as Salman arrives, technically, to help. Mostly, he makes a mess. Then, he dons this giant blue suit, with its big blue head, for reasons contrived and irrelevant. Out of this suit, Salman peers unnoticed, seeing and hearing things that he otherwise would not. He also becomes something that he otherwise is not—relevant.

All of this subterfuge is in fact quite deliberate, and occasionally funny, however the contrivances of the filmmakers here not only disguise what they would like to say about the long-waged war, they obscure the message, leaving one with not much more than a few brief glimpses of the war’s effects amidst a number of quirky distractions that are far too personal to be of use to the vast majority of us.