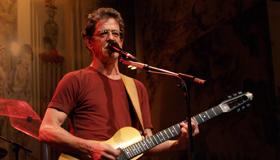 It’s not about the city, but about the album, Berlin, which came out, courtesy of Lou Reed, in 1973 and promptly sank amidst strongly critical reviews. By 2006, the concept album which featured such later hits as “Sad Song” and “How Do You Think It Feels” and the characters that were introduced in Reed’s famous “Walk on the Wild Side,” had been reappraised by its detractors, so Reed decided the time was right to perform it—along with a few songs from his Velvet Underground days—in its entirety in a New York concert, recorded over five nights by director Julian Schnabel ( The Diving Bell and the Butterfly ). The result: a well made concert film that will, nevertheless, fail to satisfy Reed’s many dedicated fans.

If the bar to reach for in live concerts on film is Jonathan Demme’s superbly realized Talking Heads movie Stop Making Sense, Lou Reed’s Berlin falls entirely short of its goal. Schnabel directs in a leaden fashion and, despite the excellent musicianship of Reed and his band, doesn’t bring the music to exciting life. Nor does he know how to use the camera to cinematic effect, the way Demme did in his musical film. (Remember his thrilling pan to the audience, for the first time, near the film’s end?)

It doesn’t help that Schnabel indulges daughter Lola by showcasing her dull music videos, which star—and waste—French actress Emmanuelle Seigner. Reed is too talented to be snuffed out by a lame director’s pyrotechnics, but neither does he deserve to be let down like this. The tunes are always great, but the film surrounding them is anything but that.