close
Love never quite comes together 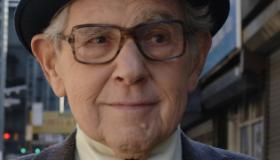 Given the Pulitzer Prize-winning quality of his decades-spanning output, it’s surprising that the work of Polish-born American literary lion Isaac Bashevis Singer hasn’t been translated to film more often. The most popular movie based on Singer’s oeuvre is 1983’s Yentl, which has taken on an unfortunate camp sheen over the years, thanks to its connection to director and star Barbra Streisand (better than Yentl is director Paul Mazursky’s 1989 take on Singer’s Enemies: A Love Story ). As Singer got older, his characters began to reflect his own concerns regarding sexual diminution (frequency, not desire) and love at an advanced age. He was even quoted as saying, “literature has neglected the old and their emotions  in love, as in other matters, the young are just beginners and the art of loving matures with age and experience.” To this point comes director Jan Schütte’s new film, which makes a deft attempt to combine three of Singer’s short stories into one narrative about how libidinous expression is fated to travel north, from the loins of the young to the imagination, dreams and regrets of the old. That the film never quite comes together is not the fault of lead Otto Tausig, whose performance as a kind of Singer surrogate earns our interest and sympathy from the get-go. Instead, Schütte’s combining of three separate stories serves only to spread Singer’s thematic concerns too thin, thereby failing to achieve the richness of the original written material. With its most likely audience dying off as we speak, monetary prospects for this elderly-skewing film are best left to cable TV.

The main narrative is based on Singer’s short story “The Briefcase.” Schütte immediately stakes his ground, starting off with an impotence-motivated nightmare by 70-something Max Kohn (Tausig), an author of some note whose signature lecture, “Fate and Free Will in Modern Literature,” is attended by increasingly sparse crowds. Despite his age, Max is still the ladies man, which renders the widower’s longtime girlfriend Reisel (Rhea Perlman, fairly wasted) jealous and mistrusting (Singer himself was known to stray from beloved second wife Alma). Still, Reisel cares for the old man. She buys him a new briefcase to store his lectures during a long train ride that’ll take him to East Coast speaking engagements where he’ll be unfavorably compared to Kafka and told how a local hockey game is responsible for his lecture’s poor turnout. On the train, Max falls asleep and his dream is essentially the Singer short story “Alone,” in which Max’s alter ego is thrown out of the Jewish version of paradise (a swanky seaside Miami Beach hotel) and forced to stay at a local flophouse where he becomes the sexual target of its crippled Cuban housekeeper (Elizabeth Peña).

Despite the film’s title, it’s not love itself that continues coming later in life. It’s our insatiable need and drive to connect, a force that remains all-powerful even when the overriding motivation isn’t sex. But Max has not written the final chapter of his sexual history just yet, and when he beds a former student who is now a middle-aged professor (Barbara Hershey), he proves that a desire to engage in our species’ most intense mode of communication can be enough to keep the juices flowing when the body has seen better days. Max is consumed not only by carnal concerns, but issues with his fading memory. Prior to his final engagement, he misplaces the briefcase containing his lecture, so he’s forced to whip up a new story to entertain his audience. That story is Singer’s “Old Love,” where the ink-and-paper version of Max befriends Ethel (Tovah Feldshuh), an attractive, heartbroken widow who wonders if life is worth living without love or the prospect of love.

Love Comes Lately is more ambitious than it lets on, and Schütte establishes a modest flow. Despite all that, this is a pretty blah piece of filmmaking. Singer’s concerns overlap in each story, but if Schütte is aware of these similarities, he doesn’t show it, so he can’t make the whole bigger than the sum of its thematic parts. However, there is a way to put the film’s unique mechanics to better use. On the unfortunate day when Philip Roth dies, someone should intertwine Roth’s life story with the adventures of his literary alter ego Nathan Zuckerman. Invite Max along, too. These two sex-obsessed oldsters would have a lot to talk about.