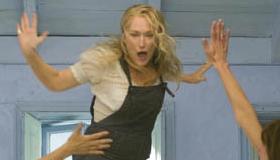 It’s really a no-brainer. The movie version of the mega-hit stage show is bound to follow its predecessor around the globe and impel audiences to dance in the aisles to the ABBA beat. The members of the top-notch cast have the time of their lives, headed by Meryl Streep as a feisty taverna owner.

Throw your skeptical preconceptions out of the window, relax and go with the ABBA-induced flow. It’s the only way to treat Mamma Mia!, a movie which works because nobody is taking any of it seriously.

It stands as a gloriously colorful and hectic beacon amid the summer action movies, providing a welcome alternative. Part of its success must be due to the fact that the same team as the stage show are behind its transfer to the screen: Judy Cramer, the producer; Phyllida Lloyd, the director, and Catherine Johnson, the book writer. The trio has been making sweet music for their respective bank accounts since Mamma Mia! opened in London in 1999. Currently still running on stage in 10 countries, it has chalked up 30 million admissions at the last count and seems unstoppable.

The casting for the movie is inspired. Who could have imagined Streep as Donna Sheridan, the lusty Greek taverna owner whose dalliances on the island with three men back in the ’70s have resulted in a daughter, Sophie (Amanda Seyfried from Mean Girls ), now about to get married? But which of the men—Pierce Brosnan, Colin Firth or Stellan Skarsgard—is the father?

The daughter, naturally, wants to walk down the aisle with her real pop, so she invites all the potential candidates to attend as well as two of her mom’s best friends from her old girl band (played by Julie Walters and Christine Baranski) to give her support and, perhaps, to focus her attention on matters of paternity.

Although the temptation must have been there, the creative team wisely hasn’t tampered with the structure or the way the songs are woven through, so prepare for Streep strutting her stuff in the title song and “The Winner Takes It All.” She sashays through the village like a wild Valkyrie, with her ageing crones in tow as well as colorful peasants and a gaggle of bridesmaids.

The men seem a shade muted in comparison, with Brosnan keeping a stiff upper lip and getting through the music with some vocal difficulty, Firth looking suitably awkward in his Bridget Jones mold while Skarsgard has a bemused air about him as if he was wondering how he got involved in the whole enterprise in the first place.

Surprisingly, it is not as camp as you might expect, though the “Dancing Queen” sequence featuring 30 or so muscular, flipper-clad hunks in Speedos (that barely cover their bits) is rather eye-popping.

What does emerge from it all is the strength and durability of the original songs and lyrics by Benny Andersson and Bjorn Ulvaeus, which are given twists by several of the cast, notably Streep in “Slipping Through My Fingers,” which is directed at her daughter as she departs with her new husband (played by Dominic Cooper). There’s also an almost poignant “Take a Chance on Me” from Walters, who is trying to cajole a reluctant suitor.

The theatrical formula might not have translated to celluloid, given that neither Craymer, Lloyd nor Johnson have ever had any film experience. Yet it’s the strength and infectious zeal of the cast that shines through and ticks all the boxes and more. The film should reach more than just the fortysomething demographics who flocked to see it on the boards. Incredibly, Mamma Mia! looks set for a whole new lease on life.