close
The highest Wire act of all 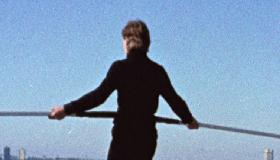 The word “tension” has multiple meanings, and almost all of them are masterfully illustrated in Man on Wire —from “how tightly something such as wire, string, thread or a muscle is stretched” to “mental worry or emotional strain that makes natural, relaxed behavior impossible.” Arthouse auds will likely feel their heartstrings stretched as tight as the rope between the Twin Towers of the World Trade Center that outlaw wirewalker Philippe Petit crossed eight times on August 7, 1974, and—properly promoted—this festival fave will have crossover crowds on the edges of their seats, as well.

It almost sounds like the setup for a terrorist thriller: A secretive cadre of foreign nationals infiltrates the World Trade Center with illegal intentions. It’s actually anything but. Man on Wire recounts the true tale of what Petit calls his “coup”—the unauthorized wirewalk between the Twin Towers that held even the officers who arrived to arrest the French performance artist spellbound for 45 minutes. (“It was like he was walking on a cloud,” rhapsodizes one eyewitness.) Still, director James Marsh (Wisconsin Death Trip) plays with are-they-or-aren’t-they-terrorists uncertainty early on in several of the too-arty black-and-white reenactment segments that are the only thudding detractions from an otherwise light-footed documentary.

The real strength of Man on Wire is Petit, an incredibly lyrical storyteller who styles himself “a poet, conquering beautiful stages” (including the Eiffel Tower, the Cathedrale Notre Dame de Paris and the Sydney Harbour Bridge in addition to the World Trade Center). Even if they were not supplemented by often-entrancing archival images, the interviews with Petit would be enough to capture audiences’ attention.

Petit reveals that he first read about the Twin Towers in the waiting room of a Parisian dentist’s office, and was so fascinated that he ripped the article out under cover of a fake sneeze and promptly left. He had a toothache for a week, but what is that, he asks, “compared to a dream?” There was, Petit insists, no rational reason for his subsequent determination to wirewalk between them. “I didn’t have any why,” he says. “Why, I will let the psychologists decide.”

This is not to say that Petit is not at all introspective. He understands that his devotion to wirewalking is, in part, due to the fact that the artist must pay precise attention at all times. While watching Man on Wire, audiences will likely feel inclined to do the same.