close
Meet Dave may push Murphy away from kiddie fare 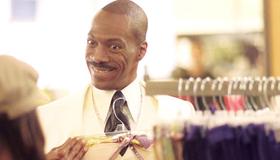 Eddie Murphy is back in his outer-space mode playing Dave, a spaceship that walks around New York City in the form of Murphy but is actually manned inside his head by a miniature crew that has landed there to study the human race. The family comedy does not have the stench of his last otherworldly affair, 2002’s disastrous The Adventures of Pluto Nash, but likely indifferent box office returns will probably convince Eddie it’s time for his career to come back down to earth. With Disney and Pixar’s space oddity, Wall-E, continuing to grab the kids and direct competition from another of this week’s openers, Walden Media’s Journey to the Center of the Earth, it’s not likely too many paying customers will be meeting Dave anytime soon.

It’s easy to understand why Murphy, whose original raunchy humor made him a star, would want to keep churning out kid stuff. Previous hits like Dr. Dolittle, Daddy Day Care and the Shrek series reinvigorated his career and made him a favorite of the under-12 set. Unfortunately, while Dave is completely harmless, it’s one-joke premise will probably wear very thin on its intended audience even at 90 minutes.

The set up is clever, with Murphy as Dave hitting The Big Apple, taking in the strange sights and trying to figure out just what makes Earth’s inhabitants tick. With his every bodily function controlled by the mini Starship Enterprise crew inside (led by Murphy in a dual role as the ship’s version of Captain Kirk), the comedy predictably centers around his human form’s attempts to fit in as he goes about his undercover mission. Romance even surfaces when he is hit by young single mother Gina’s (Elizabeth Banks) car and winds up back at her place, along with her precocious son Josh (Austyn Myers), who instantly takes a liking to the odd stranger. One of the best scenes has the two out for a wild night of salsa dancing as the one-inch beings hanging out in Dave’s ears help him to cut a rug on the floor by doing the same thing inside his head.

Lots of pop culture references to everyone from Britney Spears to Herve Villechaize(!) dot the landscape of Rob Greenberg and Bill Corbett’s serviceable script, and they managed to get tons of product placement in, as well, including some blatant shilling for Old Navy when Dave decides to go shopping for clothes. A character even promotes another of Fox’s July releases when he says, “I see that X-Files gleam in your eye.” What? They couldn’t manage to work in a plug for Space Chimps, as well?

Nonetheless, Murphy—both as Dave and the ship’s captain—is in good form, mugging for laughs and getting a few. The supporting cast is well chosen, with crew members Gabrielle Union and Ed Helms (as #2) standing out.

Director Brian Robbins, who also helmed the recent Murphy hit Norbit, does an okay job moving his cameras around without getting in the way, but most of his work is by-the-numbers. So is Meet Dave.