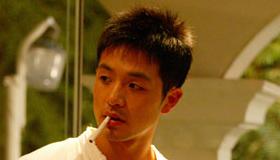 The collective taboos of humanity notwithstanding, class strictures, ancestry and honor still rule in the old cultures of South Korea, where jaded urbane city dwellers frequent bars populated by hayseeds from the countryside, both to mock their bucolic naiveté and relish it—well away from the prying eyes of co-workers and family; dead and alive. It’s a social structure that is a good deal more than “just” homophobic, and it’s the backdrop of writer/director Leesong Hee-il’s visually arresting drama about a gay boy from the country and his doomed affair with a socially compliant (kinda) young businessman from Seoul. No Regret was a scandal in its native country when it was released in 2006, but in the States, the film will play as a gay subculture film, and that’s the (limited) audience it’ll have to settle for.

Rural boy Sumin (Lee Young-hoon) finds himself adrift in Seoul, where he eventually takes up dancing (and other things) at an exclusive underground club called X-Large, a neon-lit bump-and-grind joint, where he meets Jaemin (Lee Han), a young gay businessman who is, for all the previously mentioned reasons, in ghetto parlance “on the down-low.” Here, the complicated machinations of love, desire, ancestry and class, each in very specific ways, are played out in a love-hate-love relationship that is reminiscent of the films of Wong Kar Wai ( In the Mood for Love, Chung King Express, Days of Being Wild ); employing images and action rather than language to effect a languid, oblique mood.

All of this is captured by debuting writer/director Hee-il and his cinematographer, Chi-woon Yun, with achingly beautiful visuals that sometimes verge on—but never quite reach—the abstract. You don’t really need to read the subtitles here to understand what’s going on, indeed, they may distract. And, of course, if you’re into really cute, nearly naked gay Asian boys, there’s that.