close
Myths presents an unflinching insiders view of the South 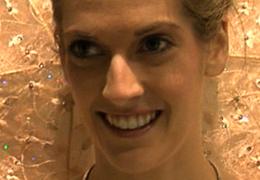 It takes an insider to break open a secret society’s gates. In Order of Myths, a filmmaker leaned on her own family roots to spindle an unflinching tapestry through Mobile, Alabama’s mudslinging past and present. Fluent with the culture and heritage of the South’s idiosyncrasies, the film zips through drawn-out introductions and does away with formalities that someone of the outer circle could get caught-up in. A film like this will land with a big bang as outsiders will get firsthand confirmation that all the ratifications and abolishment by writ and decree didn’t do away with elitism and segregation of the mind and spirit. This documentary will turn the volume up on the racial divide, provoking blue- and red-state moviehouse audiences to take pause and come away knowing the flag is a tad tattered when you look close enough. One can only hope the film reaches so wide an audience: given its scope and doc genre, box office will likely be small.

The titles all historically reference Alabama—not Louisiana—as the first state to host Mardi Gras. Once this prideful fact is established, you talk to an old-grandpa-type who claims the societies that run this masquerade are ever so secret and exclusive with their membership. Then the titles explain that there are two different celebrations—two parades divided by race. A couple masked, liquored-up lads act as a sort of chorus for the film. The more garrulous of the two—the other is something of a mute and just sort of nods—believes that racism is long gone. “Blacks and whites get along fine,” he boasts. He further explains that there actually are wealthy and well-educated blacks who work in such respectful professions as medicine and law. “They good stuff,” adds the man in the mask. In his attempt at deference, the actual result is folly. You can’t take this seriously, but that is just what a good lot of folks in the film believe.

The cast of characters trailed by the crew is a compelling batch. The black queen and king are school teachers. Stefanie Lucas is quite brazen with her lesson plan when teaching elementary students about segregation in the South. Her counterpart is Helen Meaher, who through no fault of her own is the spawn of a family that is the biggest landowner in Mobile and historically the most prominent and detested. The Meaher name adorns street signs and billboards. Helen’s great-grandmother is the oldest living Mardi Gras queen in town. But trace the family’s generations, and you’ll land on a slave trade ship called the Clothilde that was burnt into the ground after its captain lost a bet. The ship’s destruction forced its human cargo to flee from the shore to squat in the woods and create what is still known as Africa Town. There are ranting speeches by some academics and activists that peg the Meaher family as possessing a trove of antiquities brought over from Africa and claimed as their own. Disappointingly, we never get a response from any of the Meaher clan or any white member of town on the hot-button issue. Anxieties run deep, and young Helen—in her debutante ball—is plotted in the middle of this. But whatever hostility exists, when Mardi Gras and the events leading up to it go forward, all is forgotten and the good times roll.

Named for one of the ultra-secret societies responsible for Mobile’s segregated Mardi Gras, Order is one big lead-up to the Mardi Gras parade. After you’ve gotten to know the key players, anticipation of certain tensions rise to the top. Will there be a riot? Will a few blacks crash the party, or vice versa? In the end, it’s all pretty tame, actually. But what does come out is that the two parades could not be more distinct. You have the older groups rocking costumes that recall the Confederate uniform with a white hanky over their face with two holes cut for eyes. They toss beads and moon pies to the hoards of people pinned on the sides. You then get to see how the other parade goes down. With heavy hip-hop bumping in the background, crazy dances and hypnotic beats mastered by a rock-steady marching band, it’s clear that the other party can get down in a whole new and refreshing way. It’s not hard to see which party knows how to mix it up the most.

Southern traditions are rooted in their love for formalities and ability to maintain those formalities for generations. Slowly but certainly some of these have become outdated and downright offensive. But there is a strong constituency that wants to keep the blacks as dancers or torchbearers, but not actual dignitaries. Despite having its first black mayor, Mobile still struggles to come to terms with its identity of yesterday and treads close to the shallow end when it talks of tomorrow. Most of the black population has accepted the two parades, but not by choice. Still, the black king of this year’s, King Roberson, says that he’s repping the whole city. You want to believe him. You try to give him the benefit of the doubt, but in the end he’s merely a player in a game where the rules benefit the framers and not the participants.

While the kings and queens get their day of rule, the following day one expects things to go back to the same old same old. The film tends to push the set-up but doesn’t go far forward enough to see the cleanup.

Everybody wants to have a good time at a fun party. It may have been that the invitation’s intent was to be for the privileged few. But that model is beginning to crumble. How many more parades are going to go along with the divisive route? At some point, the wakeup call will come, if it hasn’t already. Armed with a camera and a nose for getting to the gritty goods, filmmaker Margaret Brown certainly has lit a flare. What becomes of it remains to be seen.